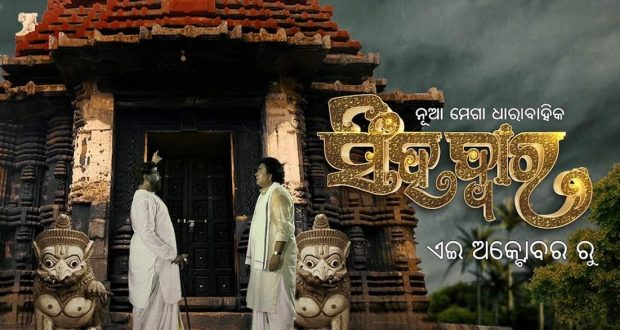 Bhubaneswar;18/8/21: Popular ‘bad men’ of the Odia film and jatra industry, Raimohan Parida and Daitari Panda are all set to make their small-screen debut this month with Manjari TV’s forthcoming mega serial ‘Singhadwara’.

With the tagline “Where ego, pride and arrogance bow down”, this mega serial is directed by Pradeep Dash. Earlier, Pradeep had helmed popular serials such as ‘Uttaradai’, ‘Dasi’, ‘Basundhara’, ‘Abujha Mana’, ‘Force Garuda’, ‘Tulasi’ and ‘Nadi Phere Sagara Ku’.

Nikita, who started her career as a child actor with Pradeep, is playing the female protagonist with newcomer Srijeet being cast opposite her in the serial.

Excited about his TV debut, Raimohan told, “It is a great feeling to start my TV debut with veteran producer Rohit Gandhi, well-known director Pradeep and Manjari TV of course. I am very much satisfied with this work. I feel this shade of my acting has never been discovered before. I feel this serial’s concept is unique and it will grab the audience’s attention. So I am really looking forward to their review.”Adding to his character Daitari said, “I am playing the character of a rich and proud old man who never bows down to anyone. This is my TV debut and I am thankful to my director Pradeep, who is continuously trying to present my character in a very unique way. With the reviews I am getting after the release of its promo, I am sure the audience is going to enjoy this serial.”

Adding about the plot of the story Pradeep said, “The Singhadwara or Mukhsala of any temple always has an emotional connection with the devotees. When devotees enter a temple, they feel relaxed and forget all their worries. So here in this serial, Singhadwara is like an eyewitness of the happenings in the story. This serial doesn’t have any magical incident, but it has a spiritual connection in a practical way. Besides I want to mention here that we are trying our best to introduce our very own Odia culture in this story. Some non-Odia writers have ruined the stories of our Odia serials and we want to rectify that. This story has not been adopted from any other language. It is an original story by Pradipta Nanda, the writer of hit serials like ‘Duhita’, ‘Uttaradai’, ‘Damini’, ‘Gayatri’, etc.