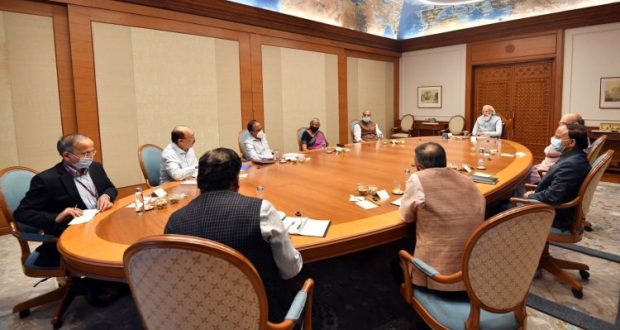 in National August 17, 2021 Comments Off on PM Modi Chairs Meeting Of Cabinet Committee On Security for deteriorating security situation in Afghanistan 267 Views

New Delhi17/8/21:: Amid the deteriorating security situation in Afghanistan after the Taliban takeover of the country, Prime Minister Narendra Modi on Tuesday chaired a meeting of the Cabinet Committee on Security (CCS).

Earlier in the day, an Indian Air Force C-17 Globemaster with 120 people, including the Indian ambassador and embassy staff, landed at Jamnagar airbase from Afghanistan. Sources said Prime Minister has been constantly in touch with officials regarding the situation.

He was taking stock of the situation till late night yesterday and was updated when the flight took off. He instructed that adequate arrangements shall be made to ensure providing food for all those who returned at Jamnagar in Gujarat.

Taliban entered Kabul on Sunday and took control of the presidential palace. The government has been closely monitoring all developments in Afghanistan.

It has also been issuing periodic advisories for the safety and security of Indian nationals in Afghanistan including calling for their immediate return to India.

2021-08-17
Editor in chief
Previous: 17/8/21:Indian Hockey Teams Get Rousing Reception In Bhubaneswar
Next: Odisha State Pollution Control Board has been ranked No-1 in Transparency Index rating