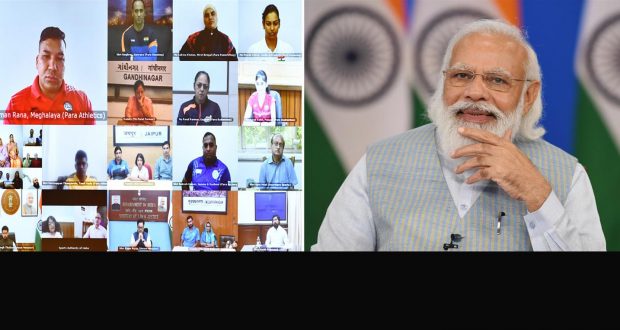 Speaking on the occasion, The Prime Minister lauded the para-athletes for their self-confidence and willpower. He credited their hard work for the biggest ever contingent to the Paralympic Games. He said he is hopeful after interacting with the para-athletes that India will create new history at the Tokyo 2020 Paralympic Games. The Prime Minister said that today’s new India does not put pressure for medals on the athletes but expects them to give their best. Referring to the recent Olympics, the Prime Minister said that country is firm with the athletes in their efforts whether they win or miss.

The Prime Minister discussed the importance of mental strength along with physical strength in the field. He praised the para-athletes for overcoming their circumstances and moving forward despite them. Keeping in mind the issues like lack of exposure and stress of new place, new people, and international settings, three sessions were conducted through workshops and seminars on sports psychology for the contingent.

The Prime Minister said that our villages and remote areas are full of talent and the contingent of para-athletes is a living example of that. He said we have to think of our youth and ensure that they should get all the resources and facilities. The Prime Minister said there are many young players in these areas with capabilities to win medals. Today the country is trying to reach them, special attention is being paid to the rural areas, said the Prime Minister. The Prime Minister informed that for recognizing local talents, 360 Khelo India Centres have been established. Soon this number will be increased to 1000 centers. Equipment, grounds and other resources and infrastructure are being made available to the sportspersons. The Country is helping its sportspersons with an open heart. The country provided necessary facilities and targets through ‘Target Olympic Podium Scheme’, said the Prime Minister.

The Prime Minister insisted that in order to reach the top, we have to shed tears that made a home in the hearts of the older generation when families were apprehensive if a child was interested in sports and there were no career prospects in sports barring one or two sports. This insecurity needed to be destroyed. The Prime Minister emphasized that we have to keep on improving our ways and system to develop sports culture in India. He pointed out that traditional sports are getting a new identity along with the promotion of international sports. He mentioned establishment of Sports University in Imphal, Manipur, status of sports in the New National Education Policy and Khelo India Movement as key steps in that direction.

The Prime Minister told the athletes that they strengthen the spirit of Ek Bharat Shreshth Bharat irrespective of the sports they represent. “Whatever state, the region you belong to, whatever language you speak, above all this, today you are ‘Team India. This spirit should permeate every part of our society at every level”’, the Prime Ministers stressed.

The Prime Minister said that earlier, giving facilities to Divyang Jan was treated as welfare, today the country is working for this as part of its responsibility. That is why the Parliament enacted a law like ‘The Rights for Persons with Disabilities Act to provide comprehensive security to the Divyang Jan.  He said ‘Sugamya Bharat Campaign’ is the biggest example of this new thinking. Today hundreds of government buildings, railway stations, train coaches, domestic airports, and other infrastructure are being made Divyang friendly. Efforts like standard dictionary of Indian Sign Language, Sign language translation of NCERT are changing lives and giving confidence to numerous talents all over the country, concluded the Prime Minister.

54 para-athletes from across 9 sports disciplines will be heading to Tokyo to represent the nation. This is India’s biggest ever contingent to the Paralympic Games.