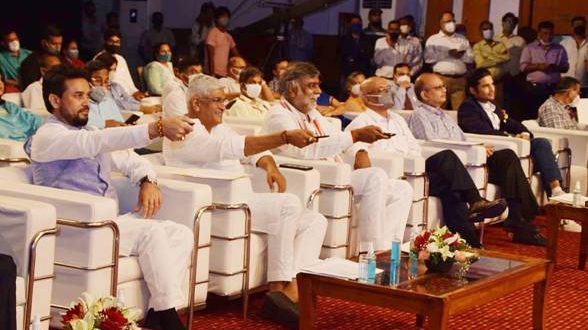 The Union Minister for Jal Shakti, Shri Gajendra Singh Shekhawat and Union Minister forInformation & Broadcastingand Youth Affairs & Sports, Shri Anurag Singh Thakur along with Minister of State for Jal Shakti and Food Processing Industries Shri Prahlad Singh Patel jointly launched the Second Season of the popular series ‘Rag Rag Mein Ganga’ today. The Season one of the series which was telecast on Doordashan in 2019 anchored by actor Rajeev Khandelwal had received an overwhelming response following which the second season was launched today.

Addressing the gathering after jointly launching the Season two of the series, Union Minister, Jal Shakti, Shri Gajendra Singh Shekhawat said that the purpose of the program is to inculcate a sense of responsibility towards this holy river in the people. He expressed pleasure at the initiative yielding very positive results. Shri Shekhawat said 40 percent of the country’s population is dependent on the Ganga River Basin for their livelihood in one way or the other and today, a new consciousness of hope and faith has awakened among the countrymen regarding the conservation, development and ecological balance of rivers. He added that people have become serious about environment conservation and this thought has given impetus to the works of conservation along with uniting the country. Shri Shekhawat said that it is a matter of pride for us to see the remarkable achievement in last few years in cleaning of river Ganga. Sharing an anecdote from his visit at world water week at Stockholm, the Union Minister said that the government’s efforts towards environment conservation are internationally acclaimed.  This has been possible because of the 4 P principle of Prime Minister Shri Narendra Modi. Shri Shekhawat further added that since public participation is an important aspect in the success of any campaign, a lot of emphasis is being laid on making this mission a Jan Andolan with Jan Bhagidari and that is why the big project has been implemented as a community plan, in which there is full participation of the public, and they are feeling a direct connection with this work. Congratulating Jal Shakti Ministry for their vision of encouraging public participation as part of Namami Gange program, Union Minister for Information & Broadcasting and Youth Affairs & Sports,Shri Anurag Thakur said that this initiative will take public participation for Ganga conservation to next level by making it a mass movement. Quoting the huge viewership of Ramayan and Mahabharat during the lockdown, Shri Thakur said that Doordarshan is known for creating quality content which remains popular even after decades. “Rag Rag Mein Ganga  season 1 and season 2 is one such program with has potential to remain popular for years”, he added. 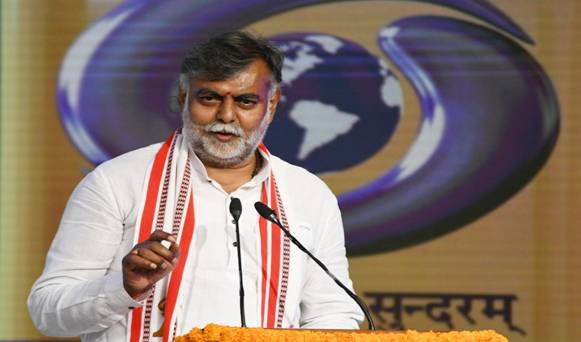 Shri Rajiv Ranjan Mishra, Director General, National Mission for Clean Gangasaid “‘Rag Rag Mein Ganga’ is a very creative and interesting initiative with Doordarshan which has proved to be very effective towards the goal of Ganga conservation and rejuvenation. He said“this time we will not only bring to the fore the importance of tributaries but will also cover new destinations with some special destinations from the previous season.” He also shared that public participation (Jan Ganga) is the core element of Namami Gange Program and Rag Rag Mein Ganga is part of many initiatives under this vision.  “As the country is celebrating the Amrit festival of freedom this time, we will also apprise the audience about the effective role played during the freedom struggle of historical places situated on the banks of Ganga and Yamuna through ‘Rag Rag Mein Ganga Season 2’.”, he added.

Sharing that while working on the show he has become very spiritual, Actor and anchor for the show, Rajeev Khandelwal said that we all consider Ganga our mother but forget that mother’s health is equally important. “This season will also be spreading awareness about tributaries, wetlands and other smaller water bodies which make river Ganga.” he said. He shared behind the scene secrets of the show and shared that unlike other shows this is not scripted. It is an organic show where the director just gives an idea. He travels and have conversations with people which organically makes the show.  He also shared that he received a call from Sudha Murty praising the show and informed him that she has recommended the show to her son-in-law who is a finance minister in UK government. She advised her son-in-law to make similar program on river Thames.

Shri Mayank Kumar Agrawal, DG, Doordarshan, shared that the first season nearly 2 crore viewership. He informed that Doordarshan received many letters requesting for second season from all over the country.

First season focused spreading awareness about ecology, heritage and lifestyle associated with Ganga.  The show found a huge resonance with the audience, especially the youth, who found the travel series a repository of infotainment and Ganga related knowledge. The show received a good review on IMDB rating. After covering some of the majestic locations along the Ganges in first season, season 2 will cover the journey of some of Ganga’s main tributaries like the Yamuna, Kali, Saryu and the Gandak and showcase the cultural, historical, environmental and socio-economic aspects of the important cities on the banks of these tributaries. The messages of river rejuvenation and water conservation has been interwoven and their importance reflected through the work being done by NMCG focusing on both Nirmalta and Aviralta. Starting 21st August 2021, the program will be telecasted every Saturday and Sunday at 8.30 pm on DD National.