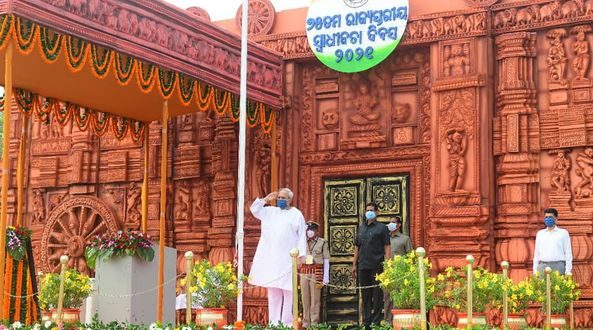 Bhubaneswar:15/8/21:Odisha is setting new milestones in various spheres and the State is also showing the way to others in the ongoing fight against Covid-19, said Chief Minister Naveen Patnaik after hoisting the National Flag on the occasion of 75th Independence Day celebrations in Bhubaneswar.

Patnaik, in his address to the people of the State, praised the efforts of the brave soldiers and also paid rich tributes to the freedom fighters of the country and the State who played a crucial role in the freedom struggle.

Lauding the ongoing efforts to curb the Covid-19 infections, Patnaik also praised the Covid warriors. “Odisha is placed in a much better position compared to other States in the fight against Covid-19 in the country. Odisha supplied medical oxygen to 17 States for nearly two months during the second wave of the pandemic for around two months and helped save many lives,” said Patnaik. 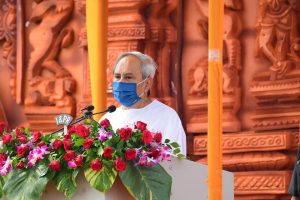 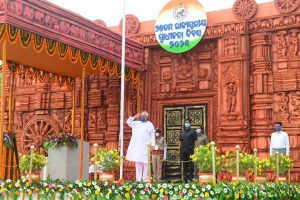 Highlighting that health is one of the major sectors which is in the focus area of the State government, Patnaik said that Biju Swasthya Kalyan Yojana (BSKY) will be implemented in a new way and the BSKY Smart Health Cards will be issued to around 96 lakh families (3.5 crore population) in the State.

The Smart Health card initiative is the first of its kind in the country and people can avail health services in more than 200 hospitals chains of the country.

Each family can avail of treatment cost up to Rs 5 lakh per annum. Similarly, women members can avail of this benefit up to Rs 10 lakh every year. The beneficiaries of National and State Food Security Schemes, Annapurna, and Antyodaya schemes will get this benefit.

Speaking on the occasion, Patnaik said Odisha had started to sponsor the Indian hockey teams in 2018. The team also recently won a medal in the recently concluded Olympics which made the entire country proud. Our effort was to promote hockey, said Patnaik.