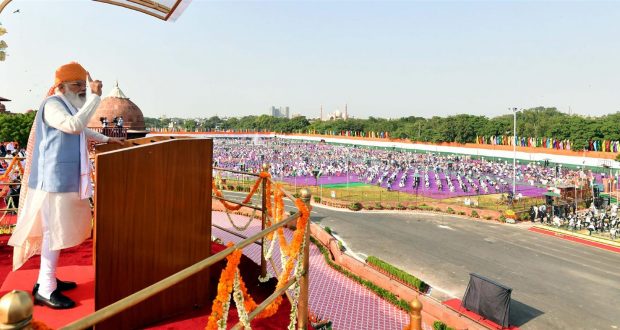 Newdelhi:15/8/21:The Nation celebrates its 75th Independence Day today. Prime Minister Narendra Modi hoisted the national flag and addressed the nation from the ramparts of the Red Fort in New Delhi. Prior to flag hoisting, he inspected the Guard of Honour. For the first time this year, as soon as the national flag was hoisted by the Prime Minister, two Mi 17 1V helicopters of the Indian Air Force showered flower petals. On his arrival in the Red Fort, Prime Minister was received by Defence Minister Rajnath Singh and Minister of State for Defence Ajay Bhatt and Defence Secretary Ajay Kumar. Before reaching Red Fort, Prime Minister Narendra Modi visited Rajghat and offered floral tributes to Father of the Nation Mahatma Gandhi.

The 75th Independence Day celebrations at Red Fort were special with a whole new fervor. AIR correspondent reports, after the arrival of the Prime Minister at the Red Fort, he was received by Defence Minister Rajnath Singh, Minister of State for Defence Ajay Bhatt and Defence Secretary Dr Ajay Kumar. A combined Inter-Services and Delhi Police Guard presented a general salute to the Prime Minister and after that, he inspects the Guard of Honour. After being hoisted, the Tricolour received a Rashtriya Salute which was synchronised with the 21 Gun Salute. Thirty-two Olympic winners, including javelin thrower Subedar Neeraj Chopra India’s first-ever Gold Medallist in track and field, participated in the Independence Day celebrations. Around 240 Olympians and sports federation officials were also present.

To honour the Corona warriors who played a vital role in fighting COVID-19, a separate block on the Southside of the Rampart was created. For the first time ever, this year as soon as the National Flag was hoisted flower petals were showered at the venue by two Mi 17 1V helicopters of the Indian Air Force in Amrut Formation. After the showering of flower petals, the Prime Minister addressed the Nation. At the conclusion of the speech of the Prime Minister, the 500 NCC cadets sang the National Anthem.