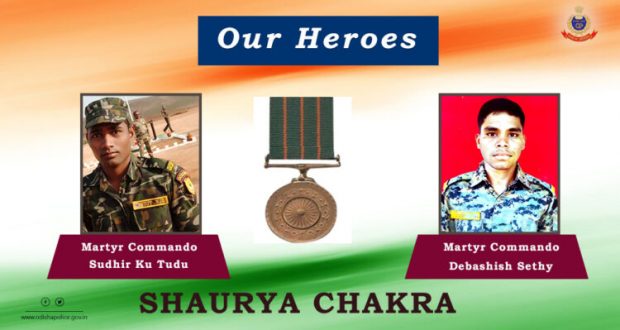 Bhubaneswar/New Delhi:14/8/21: Ahead of the 75th Independence Day celebration tomorrow, the Government of India conferred Shaurya Chakra for 2021 upon 15 security personnel including two martyrs from Odisha Police.

Announcing the names of recipients for Gallantry Award for Independence Day, 2021, the Government stated Sudhir Kumar Tudu, Commando, Odisha Police and Debasis Sethy, Commando, Odisha Police will be honoured with Shaurya Chakra posthumously. On September 9, 2020, the two Commandos laid their lives while fighting bravely with members of the Left Wing Extremism during an anti-Maoist operation in the dense forest near village Sirki under Madanpur Rampur police station of Kalahandi district. During the operation five hardcore Maoists were killed.

In a tweet, DGP, Odisha, Abhay remembered the valour of the two martyred Commandos and stated, “Very proud moment for @odisha_police. Govt of India has selected for #ShauryaChakra Martyr Debashish Sethy & Martyr Sudhir Ku Tudu. We celebrate their exceptional bravery, valour & courage. Their sacrifice inspires us all. Talked to their family to convey our gratitude & support.”
2021-08-14
Editor in chief
Previous: Employees of SAIL, Ministry of Steel win highest number of PM’s Shram Awards
Next: Puri district administration has lift restriction on the conduct of Cremation Of Non-Puri Residents at Swargadwar