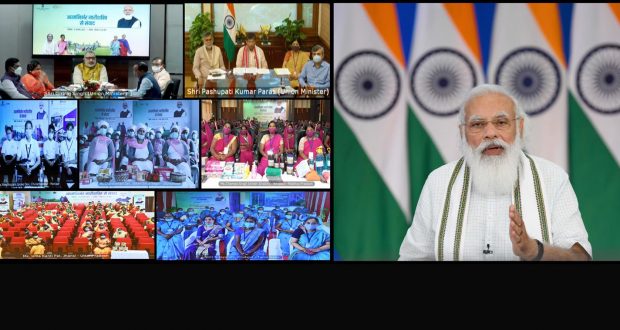 in National August 12, 2021 Comments Off on PM interacts with women Self Help Groups in ‘Atmanirbhar Narishakti se Samvad’ 233 Views

Newdelhi:12/8/21:iPrime Minister Shri Narendra Modi participated in ‘Atmanirbhar Narishakti se Samvad’ and interacted with women Self Help Group (SHG) members/community resource persons promoted under the Deendayal Antyodaya Yojana-National Rural Livelihoods Mission (DAY-NRLM) today via video conferencing. During the event, a compendium of success stories of women SHG members from all across the country, along with a handbook on universalization of farm livelihoods was released by the Prime Minister.

The Prime Minister also released capitalization support funds to the tune of Rs. 1625 Crore to over 4 lakh SHGs. In addition, he released Rs. 25 crore as seed money for 7500 SHG members under the PMFME (PM Formalisation of Micro Food Processing Enterprises) Scheme of Ministry of Food Processing Industries and Rs. 4.13 crore as funds to 75 FPOs (Farmer Producer Organizations) being promoted under the Mission.

Speaking on the occasion, the Prime Minister lauded the Self-Help Groups of women for their unprecedented services during the Corona period. The Prime Minister recognized their unparalleled contribution in making masks and sanitizers and providing food to the needy and spreading awareness.

The Prime Minister said that to increase the scope of entrepreneurship among women and for greater participation in the resolve of AatmaNirbhar Bharat, major financial support has been given today to more than 4 lakh SHGs on the eve of Raksha Bandhan. He said that the Self-help group and Deen Dayal Antyodaya Yojana have brought a new revolution in rural India. He added this movement of women’s self-help groups has intensified in the last 6-7 years. He said that today there are 70 lakh self-help groups across the country which is more than three times the figure during 6-7 years.

The Prime Minister recalled the time before this government when crores of the sisters did not have a bank account, they were miles away from the banking system. That is why the government started the massive campaign to open Jan Dhan accounts, he said. He added that today there are more than 42 crores Jan Dhan accounts of which close to 55% of the accounts are of women. He said the bank accounts were opened to make it easy to take loans from banks.

The Prime Minister said that the amount of help the government has provided for the sisters under the National Livelihood Mission is many times more than the previous government.  An unsecured loan of about Rs.4 lakh crore has also been made available to self-help groups. He said in the last 7 years self-help groups have also done a great job of repaying banks. There was a time when bank loans close to 9% became NPA. Now it has come down to 2-3 %. He lauded the honesty of the women in the Self Help Group.

The Prime Minister also announced that now the limit for loans available to self-help groups without guarantee has been doubled to Rs 20 lakh. He said that the condition of linking your savings accounts with the loan account has also been done away with. He added that with many such efforts, you will now be able to move forward with more enthusiasm in the campaign of self-reliance.

The Prime Minister said that the government is also encouraging toys made in India and also giving all possible help for this. Especially the sisters of our tribal areas who are associated with it traditionally. He said there is a lot of potential for Self Help Groups in this too.

The Prime Minister said today’s campaign is going on to make the country free from single-use plastic. Self-help groups have a dual role in this. He urged the SHGs to raise awareness about single-use plastic and work for its alternative. He also urged the self-help groups to take full advantage of the online Government e-marketplace. He said today, in transforming India, opportunities are increasing for the sisters and daughters of the country to move forward.

The Prime Minister urged the self-help group to link their efforts of nation-building with Amrit Mahotsav also. He said that with the collective power of more than 8 crore sisters and daughters, Amrit Mahotsav would be taken to new heights. He asked them to think about how they can cooperate with the spirit of service. He cited examples like running a campaign on nutritional awareness for women, running a campaign to administer COVID-19 vaccines, cleanliness, and water conservation in their villages, etc. He asked the women in self-help