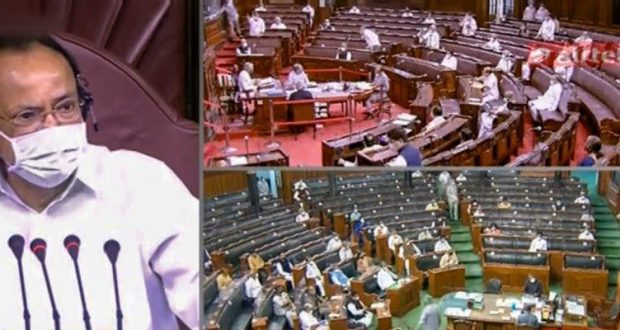 in Column August 12, 2021 Comments Off on Anti-democratic and violent behaviour of opposition during the Parliament sessions scripts a dark chapter in the history of Indian democracy 363 Views

Deplorable actions by opposition Members of Parliament (MPs) have become a norm. Their actions in this session were not an exception but a continuation. From tearing of the rule book last year to the opposition indulging in most unparliamentary conducts ever witnessed by this House, the conduct of opposition is becoming shameful day by day. This was said in a press conference today in New Delhi. The press conference was attended by Union Ministers Shri Piyush Goyal, Shri Dharmendra Pradhan, Shri Mukhtar Abbas Naqvi, Shri Prahlad Joshi, Shri Bhupendra Yadav, Shri Anurag Singh Thakur, Shri Arjun Ram Meghwal and Shri V Muraleedharan.

The Ministers pointed out that the opposition had publicly stated that the session should be washed out. Their intention was to not let the house conduct business. In fact, the Government had offered discussions on several occasions. However, appeals for discussions fell on deaf ears and they even took papers from the hands of the Hon’ble Minister and tore them. Even the Hon’ble Prime Minister was not allowed to introduce the Newly sworn In Council of Ministers.

Some Opposition members desecrated the sanctity of the House by climbing the Sanctum Sanctorum (Garbhagriha), namely the table located at the well of the House and threw the Rule Book at the Chair. The Member of Parliament who stood on the table in the Parliament was not only standing on the table but was trampling upon Parliamentary ethics. He was not only throwing a book at the chair but was also throwing Parliamentary conduct out of the House. Such behaviour is unprecedented in our House and the opposition has done grievous harm to the reputation of the house. The opposition’s behaviour was an assault on the dignity of the institution and could have grievously injured the Secretary-General. Misbehaviour by the Opposition members is a shameful disgrace in the Parliamentary History of India. It is rather unfortunate that the opposition MPs are not even apologetic about their actions. Rather they are considering these shameful actions as acts of valour.

Shri Piyush Goyal said that opposition has misbehaved throughout the session only because they do not want issues of public welfare to be discussed. It is demanded that strict action should be taken on the shameful and obstructive behaviour of the Opposition. They wanted to create Opposition unity to foster national disunity. They owe answers to the nation.

The Opposition questions over bills being passed in din. However, it is their refusal to allow parliamentary debate that has left no choice. From merely shouting, they have shifted to violence and manhandling staff to disrupt the parliamentary process. Also, where was this concern about passage without discussion when numerous bills were passed in din during the UPA rule? Between 2006 and 2014, the United Progressive Alliance (UPA 1 & 2) government passed a total of 18 Bills in a hasty manner.

Despite highest disruption since 2014, the no. of bills passed per day during this session in Rajya Sabha was the 2nd highest since 2014 (i.e. 1.1 bills per day passed). The time lost due to interruptions/adjournments (till Aug 11) was 76 Hours 26 Minutes and the highest average time per day lost due to interruptions/adjournments since the 231st session of Rajya Sabha in 201 was 4 Hours 30 Minutes.

Despite all the chaos and disruption, 19 Bills passed in Rajya Sabha (incl. Constitutional Amendment on OBC reservation also passed), which are in national interest and will benefit the poor, OBCs, workers, entrepreneurs, & all sections of our society. This reflects the commitment, productivity and ability of the Govt to drive legislative agenda in the Parliament, which aims to fulfil the aspirations of its citizens. It will shape the future of our country. Govt successfully carried out Govt business during the session.

Details of the Monsoon Session

The Taxation Laws (Amendment) Bill, 2021 provide that no tax demand shall be raised in future on the basis of the said retrospective amendment for any indirect transfer of Indian assets if the transaction was undertaken before 28th May 2012.

The General Insurance Business (Nationalisation) Amendment Bill, 2021 provides for greater private participation in the public sector insurance companies and to enhance insurance penetration and social protection and better secure the interests of policyholders and contribute to faster growth of the economy.

The Deposit Insurance and Credit Guarantee Corporation (Amendment) Bill, 2021 enables easy and time-bound access by depositors to their own money, even when there are restrictions on banks. It is proposed to provide that even if a bank is temporarily unable to fulfil its obligations due to restrictions such as moratorium imposed on it, depositors can access their deposits to the extent of deposit insurance cover through interim payments by the Corporation.

The Limited Liability Partnership (Amendment) Bill, 2021   converts certain offences into civil defaults and changes the nature of punishment for these offences.  It also defines small LLP, provides for the appointment of certain adjudicating officers, and establishment of special courts.

The Factoring Regulation (Amendment) Bill, 2021 seeks to help micro, small and medium enterprises significantly, by providing added avenues for getting credit facilities, especially through Trade Receivables Discounting System. An increase in the availability of working capital may lead to growth in the business of the micro, small and medium enterprises sector and also boost employment in the country.

The Marine Aids to Navigation Bill, 2021provides for the development, maintenance and management of aids to navigation in India; for training and certification of operator of aids to navigation, development of its historical, educational and cultural value; to ensure compliance with the obligation under the maritime treaties and international instruments to which India is a party.

The Inland Vessels Bill, 2021promotes economical and safe transportation and trade through inland waters, to bring uniformity in application of law relating to inland waterways and navigation within the country, to provide for the safety of navigation, protection of life and cargo, and prevention of pollution that may be caused by the use or navigation of inland vessels, to ensure transparency and accountability of administration of inland water transportation, to strengthen procedures governing the inland vessels, their construction, survey, registration, manning, navigation.

The Airports Economic Regulatory Authority of India (Amendment) Bill, 2021 proposes to amend the definition of “major airport” so as extend its scope to determine the tariff for a group of airports also, which will encourage development of smaller airports.

The Constitution (One Hundred and Twenty-Seventh Amendment) Bill, 2021seeks to adequately clarify that the State Government and Union territories are empowered to prepare and maintain their own State List/ Union territory List of socially and educationally backward classes.

The Juvenile Justice (Care and Protection of Children) Amendment Bill, 2021provides that instead of the court, the district magistrate (including additional district magistrate) will issue such adoption orders. The Bill adds that serious offences will also include offences for which maximum punishment is imprisonment of more than seven years, and minimum punishment is not prescribed or is less than seven years.

The Constitution (Scheduled Tribes) Order (Amendment) Bill, 2021 to modify the list of Scheduled Tribes in relation to the State of Arunachal Pradesh.

I–22 BILLS PASSED BY BOTH HOUSES OF PARLIAMENT

II – 2 OLD BILLS THAT WERE WITHDRAWN

*The two Bills, as passed by Lok Sabha were transmitted to Rajya Sabha for its recommendation, are not likely to be returned to Lok Sabha within the period of fourteen days from the date of their receipt in Rajya Sabha. The Bills will be deemed to have been passed by both Houses at the expiration of the said period in the form in which they were passed by Lok Sabha under clause (5) of Article 109 of the Constitution.