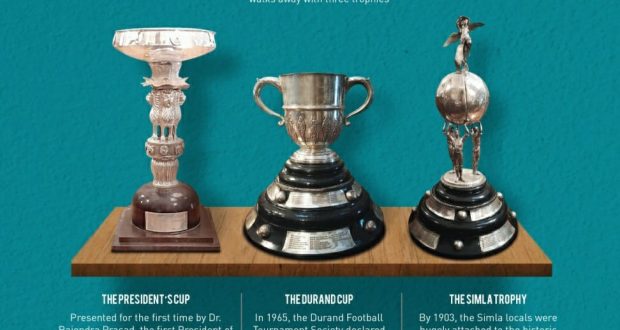 New Delhi: 12/8/21;Durand Cup, the world’s third oldest and Asia’s oldest football tournament is poised to make a comeback after a year’s hiatus due to the Covid-19 pandemic. With the dynamic support of All India Football Federation (AIFF), IFA (West Bengal), and the Government of West Bengal, the 130th Edition of Durand Cup is set to become a landmark event.

The prestigious tournament was first held in 1888, at Dagshai (Himachal Pradesh) and is named after Mortimer Durand, who was then the Foreign Secretary in charge of India. The tournament was a conscious way to initially maintain health and fitness amongst the British troops but was later opened to civilians and currently is one of the leading sports event in the world. Mohun Bagan and East Bengal are the most successful teams in the history of the Durand Cup winning it sixteen times each.

The Tournament was shifted from Delhi to Kolkata in 2019, which was won by Gokulam Kerala by beating Mohun Bagan 2-1 in the finals. The West Bengal capital will again host the four-week-long tournament, scheduled between 05 September to 03 October 2021, with matches being played at various venues in and around Kolkata. Sixteen participating teams from across the country, including four teams from the Services, are set to bring out the competitive and true sportsman spirit to win the coveted trophies.

2021-08-12
Editor in chief
Previous: India@75 is a declaration for a new India with new dreams, new energy and new commitment: Piyush Goyal
Next: All India Elephant and Tiger population estimation exercise to be done in convergence for the first time in 2022