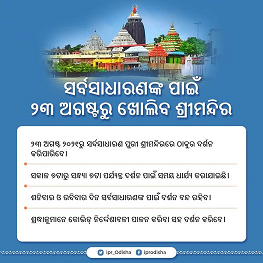 Puri:11/8/21:Amid the gradual reopening of various temples and places of worship in the state, the Odisha Special Relief Commissioner (SRC) and the Shree Jagannath Temple Administration (SJTA) have come up with a standard operating procedure for darshan at Puri Srimandir. As per the guidelines, the 12th century shrine will be opened for public darshan gradually from August 16th. The family members of the sevayats will be allowed darshan on August 12th & 13th before the general public.

Meanwhile, the residents of Puri Municipality area will be allowed darshan from Aug 16th till 20th. General public will be allowed entry for darshan from Aug 23rd. The darshan timings have been fixed from 7 AM till 7 PM on all days, except weekends and special occasions like Janmashtami & Ganesh Chaturthi, the SOP has stipulated. As per the SOP, devotees have been barred from touching the statues & idols, to take flowers, Prasad offerings, lamps inside the temple.

Chewing of tobacco & paan inside the temple premises has been strictly prohibited along with polythene bags. As per the SOP, partaking of Mahaprasad inside Anand Bazaar and within temple premises has also been restricted. Meanwhile, the SOP advised senior citizens above 65 years of age, persons with co-morbidities, pregnant women and children below 10 years to avoid visiting the shrine.

2021-08-11
Editor in chief
Previous: 261 COVID-19 positive cases have been detected under the Bhubaneswar
Next: DGP Abhay welcomes Olympians Birendra Lakra and Amit Rohidas