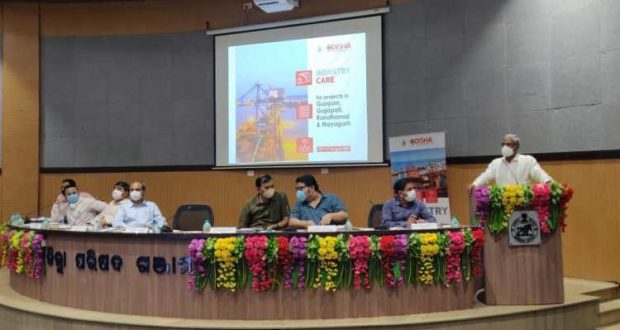 Bhubaneswar:11/8/21: Under the guidance of Chief Minister Naveen Patnaik, Asit Kumar Tripathy, IAS (Retd.) Principal Advisor to Odisha CM & WODC Chairman has been emphasising to strengthen the industrial growth in every district of the state.

As part of the ‘Industry care’ initiative to engage formally with district wise industries and to raise awareness about business reforms and institutional mechanisms among industries and address their issues on a high priority basis, senior officials from the Government of Odisha met industries located in Ganjam, Gajapati, Nayagarh and Kandhamal at the Conference Hall of DRDA, Ganjam held on 10th and 11th August 2021.

The meeting was attended by 14 large scale industries and a total of more than 60 MSME units. Large industries such as Tata SEZ, IOCL, GAIL, Grasim Industries, Smartchem Technologies Ltd., Coastal Biotech etc. participated among others.

The majority of the issues raised by the participated industries are related to the Gopalpur Pipeline corridor, land, power supply, license renewal, credit to the units, approach road and water supply. These issues will be now vigorously monitored by the Department of Industries.

Specific issues related to the upcoming pipeline corridor from Gopalpur Port to Tata SEZ was raised by Tata SEZ. Principal Secretary, Industries emphasized the importance of the proposed pipeline corridor for attracting investment in the region.

Senior officials from the department of MSME including Shri Satyabrata Sahu, IAS Principal Secretary, MSME Dept, Government of Odisha have interacted with the industries in a session held on MSME.

These initiatives providing a unique opportunity for MSMEs to directly interact with the senior officials of the Government of Odisha and the on-site resolutions helping them solving their long-pending issues and concerns.

A Workshop on Prospective Economics Activities in the District of Ganjam, Gajapati, Nayagarh and Kandhamal was chaired by Shri Asit Kumar Tripathy, IAS (Retd.) to highlight the potential economic activities in the sectors of Agriculture, Aquaculture, Textile & Tourism among others.

Furthermore, in a significant move to streamline the investment facilitation mechanism at the district level, the Government of Odisha has announced the setting up of dedicated “District Investment Promotion Agencies (DIPA)” in each of the 30 Districts across the State.