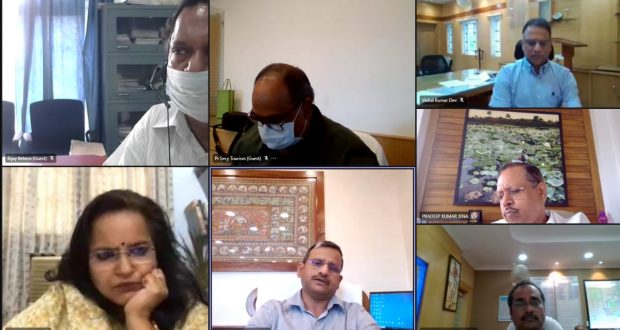 Bhubaneswar:11`/8/21: Prepare action plan for strengthening the saline and flood embankments directed Chief Secretary Suresh Chandra Mahapatra to the department of Water Resources. Mahapatra gave this direction while looking into increased frequency and intensity of the cyclones in the context of changing climatic conditions.

A high a level meeting to this effect was held under his chairmanship on digital mode from Lokseba Bhawan last evening wherein Principal Secretary Water Resources Anu Garg outlined the changing coastal characteristics and existing infrastructure for checking tidal surge for discussion.

Reviewing the current scenario, Mahapatra directed the department to identify the vulnerable locations and tracks where there would be the probability of the tidal ingress to the land. Development commissioner Sri Pardeep Kumar Jena directed to do a scientific assessment of the coastal geophysical features for locating the areas where engineering intervention could be a solution. Chief Secretary also asked to identify ‘at risk’ areas from where permanent evacuation would be the only scientific solution.

Presenting the details, Principal Secretary SmtGarg said: “With around 17% of coastline ( 480kms), Odisha faces around 35% of the cyclonic storm along with tidal surge. The State is sixth most cyclone-prone area in the World. There are also flat terrains with fertile agricultural land with dense population adjacent to the coastline”.

The review showed that around 1,636 km of saline protection embankments and 5,864 km of flood protection embankments were built during the last years mostly in districts like Ganjam, Puri, Jagatsinghpur, Kendrapara, Bhadrak, and Balasore. During the last ten years, Odisha faced seven very severe to extremely severe cyclones. The coastal belt witnessed tidal surges of 3.5 mt to 4.5 mts at the time of cyclones thereby causing large-scale saline inundation. In the context of increasing frequency and intensity of the cyclones, there would be the necessity of further raising the strengthening of the embankments.

Chief Secretary Mahapatra directed the engineers of water resource department to talk with people who live close to the sea and who have their landed property on the coastline; and, convince them about the necessity as well as the utility of strengthening the saline/flood embankments. Raising height of the embankments would save them from tidal surges and inundations in the future. The department was asked to prepare the action plan focusing on the highly vulnerable tracks within a month.