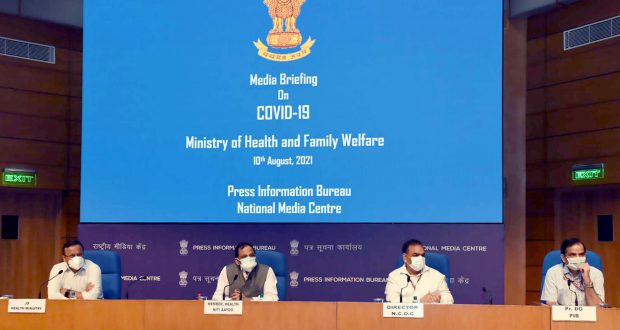 New Delhi;10/8/21:More than 51 crore 45 lakh COVID vaccine doses have been administered in the country so far under the Nationwide Vaccination Drive. The Union Health Ministry said, more than 54 lakh 91 thousand vaccine doses were administered during the last 24 hours.

The Government has said the daily new COVID-19 cases continued to show a decline during the 2nd wave in the country. Briefing media in New Delhi today, Joint Secretary in Health and Family Welfare Ministry, Lav Agarwal has said, the daily new cases recorded on the 7th of May was around four lakh 14 thousand.  Mr. Agarwal said, more than 51 percent of the total cases were reported in Kerala last week.

Mr. Agarwal said that India is registering a significant decline in active caseload and currently it is around three lakh 88 thousand. He said Kerala is the only state in the country where the active cases were above one lakh. He said, 27 States have less than ten thousand active cases. Mr. Agarwal said, the country is also witnessing a consistent increase in recovery rate, which is 97.4 percent as of today.

Mr. Agarwal appealed to the people to continue to follow Covid’s appropriate behavior like wearing masks and maintaining social distance as they are very effective tools in giving protection from Covid-19.

The Director of National Centre for Disease Control, Dr. S K Singh said, a total of 86 cases of Delta Plus variants have been reported in the country. He said the highest number of 34 cases were reported in Maharashtra. Dr. Singh said, however, there has been no exponential increase in the spread of COVID19 infection due to Delta Plus variant so far. He added, Rapid Response Team will be constituted by Health Department in each State and Union Territory to deal with the mutation.