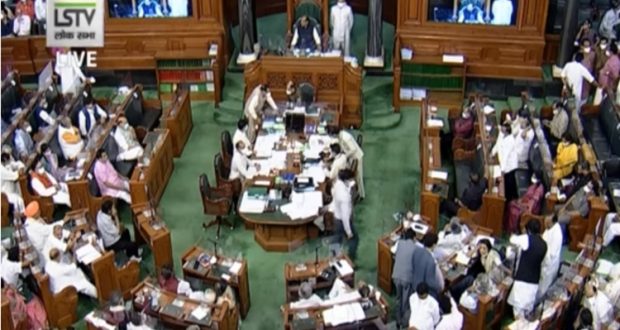 Newdelhi:10/8/21; Lok Sabha is now taking up The Constitution (One Hundred and Twenty-Seventh Amendment) Bill, 2021 for discussion and passing. The bill seeks to restore the power of States and Union Territories to make their own OBC lists.  Moving the Bill, Social Justice and Empowerment Minister Dr. Virendra Kumar said it will empower the state in preparing the OBC list. He said the legislation will also help to strengthen the federal structure of the country. Dr. Kumar reiterated government’s commitment to the welfare of OBC community.

Initiating the debate, Congress leader Adhir Ranjan Chowdhury said the opposition is in support of the Bill in the interests of the OBC community.  He alleged that the government has brought this Bill keeping an eye on the Assembly elections of Uttar Pradesh and Uttarakhand. Mr. Chowdhury said Congress party has always been at the forefront for the upliftment of the OBC. He questioned the government over Pegasus snooping saying why the government has not started an investigation into it like other countries.  Mr. Chowdhury said many states want to increase the ceiling of reservations. He cited the example of Tamil Nadu, its social movement that led to the reservation. He said reservation is an affirmative action to uplift them.

Sanghamitra Maurya of BJP accused Congress of bringing NEET in a bid to cancel the reservation. She said, the NEET is based on the NCERT syllabus and the poor don’t read this syllabus. She reminded Congress that the people have rejected them and hence they are losing elections. She lauded the Cabinet for having the highest representation of OBCs.

T.R. Baalu of DMK also raised the issue of removing the ceiling. He also profusely thanked the government for bringing the Bill. Mr. Baalu remembered the history of the reservation and recalled the contribution of Kamaraj and Nehru. Mr. Baalu said V P Singh implemented Mandal Commission and that is how the 27 percent reservation for OBCs came into effect.

Supporting the Bill, Kalyan Banerjee of TMC said, a constitution is a tool for the removal of disparities.

Akhilesh Yadav of Samajwadi Party supporting the Bill said there are several other things he wants to talk about. He questioned the intention of the government since it has not removed the ceiling.

Ritesh Pandey of BSP supported the Bill. He, however, accuses the government of double standards. He said most jobs are contractual or private and wondered where this reservation will be implemented.