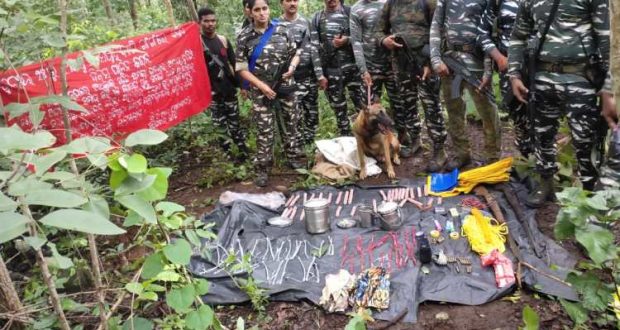 in District Diary August 7, 2021 Comments Off on  Security personnel has busted a camp of the CPI(Maoist) inside a forest in Trilochanpur area in Kalahandi 336 Views

Lanjigarh:7/8/21: Security personnel on Saturday busted a camp of the CPI(Maoist) inside a forest in Trilochanpur area in Kalahandi district and seized arms, ammunition, and other materials from there.

Acting on a tip-off, CRPF jawans, who were carrying out a combing operation, raided a forest area in Niyamgiri hill near Tadijhola village under Lanjigarh block.

On being arrived at the camp, it was deserted by the Maoists, but a poster, detonators, Maoist literature, and other materials were seized from the site, sources said.

The Maoists, however, had fled from the camp before the security personnel reached there. Combing operation has been intensified in the area. Few other explosive contents were also found and destroyed on the spot, sources added.