in Book Review, Literature August 7, 2021 Comments Off on Book Review:After the Deluge 864 Views

In this bleak moment when mankind reels under the threat of an epidemic that refuses to subside, and natural disasters like flood, fire, and storm threaten in tandem our very existence, there couldn’t have been a more appropriate time for the appearance of a colossally optimistic novel, After the Deluge (Black Eagle Books, USA)a translation of Jnanpith laureate Dr. Pratibha Ray’s award-winning Odia novelMagnamati (2004). Translated into English by Prof. Prafulla Kumar Mohanty, the book is written in the backdrop of the nineteen ninety-nine super cyclone that ravaged vast coastal areas of Odishain massive inundation and wrought havoc in the lives of people who depend on the sea and the soil beyond, for their very existence. But the novel, like any timeless work of art, transcends the local and becomes a universal tale of hope and regeneration in the face of unspeakable human tragedy. Flood has been a recurrent symbol in cultures across the world -be it in the MaschyaPurana or the episode of Noah’s Ark in the Bible to say the least. Ray’s book is a modern epic that uses flood to tell an awe-inspiring tale of man’s struggle and his triumph in the battle against nature. 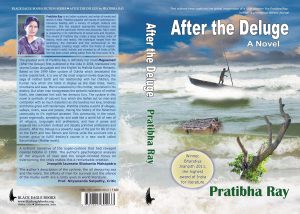 .Besides being a panoramic depiction of the insurmountable, brute forces of nature – darkness, wind, and water, After the Deluge is also attributed to the indomitable human spirit which ultimately triumphs over death, loss, and devastation. In this epic battle of man versus nature, man obviously is a fragile agent, and nature as an adversary is a dark, destructive, and disproportionately mightier force. Ray is a visionary; like a fortune-teller, she knows what awaits the destitute. These humblest of human beings who have lost homes loved ones, and livelihoods face a tomorrow that is absolutely dark. But they must gather themselves and rise from the submerged earth. Once the storm subsides, they reckon their loss, bury those who succumbed to the devouring wind and the surge and think of their journey ahead. Hungry, lost, and at a loss for words to describe their sorrow -these human beings walk through acres and acres of ruined rice fields, pan groves, and vegetation. They swim the water suffused with the stench of human and animal carcasses, just to announce to the rest of the world that they are alive. The fishermen amongst them get ready to go back to the sea. Life ordains and these folks follow. The book records their lore, dialects, rituals, and practices. From the name of the varieties of fishes found in those rivers and the sea to the names of rice cultivated in the area, Ray becomes the keeper of their history. She links water with boundless freedom, love, and human connectedness.

After the Deluge therefore is a timeless testament of the lives of the folks it depicts so vividly. Pratibha Ray’s characters are stakeholders in a saga of loss and hope. She cautions that the deluge in areas of Jagatsinghpur, the arena of her theatre was not the last or the final one but the human beings who braved the disaster without giving up and renewed their vows to take on life’s challenges headlong, epitomize exceptional grit and heroism.

Pratibha Ray was born in a remote village, Alabol of Odisha state, India in 1944. She studied in the oldest and most prestigious Ravenshaw College, now a University in Odisha. Later she worked as a Professor in the same college and was awarded the ‘Gem of Ravanshaw by the University. After a long and rewarding teaching career, she was elevated to the constitutional post of member, Odisha Public Service Commission. Her doctoral research was on Intellectual Achievement and Responsibility of slum children and Post Doctoral research on the Criminal propensity of the most primitive Bonda Tribe of Odisha. Subsequently, she has written a voluminous novel ‘Aadibhumi’, based on the Bonda tribe, translated into English as ‘Primal land'(Orient Black Swan). As a writer, she has always been drawn to themes of the oppressed and downtrodden people of society. She is the author of 22 novels and 26 story collections, 10 travelogues, poetry collections, essay collections, and an autobiography. The most acclaimed fictional work of the author was ‘Yajnaseni’ for which she received Bhartiya Jnanpith Trust’s Moorti Devi award in 1991. She is the first and only woman writer till date to receive this coveted award. This novel has gone into its 106th edition which is unique in Odisha and rare in India. Apart from various National awards, she is the winner of prestigious national awards like Sahitya Akademi. She is the winner of the coveted Bharatiya Jnanpith 2011, the highest award of India for literature. She is a household name in Odisha and most parts of India due to her translated works. Her creations revolve around various subjects such as racial constraints, mythology, history, social issues and the perennial struggle against violence and terrorism. LOVE AND LET LIVE is her motto. GIVE ME YOUR HEART, I WILL GIVE YOU GOD is her mantra.Basudheiva Kutumbakam is her philosophy. My country is my paradise is the voice of her soul.

Prafulla Kumar Mohanty is a celebrated literary critic, creative writer, and bilingual poet. He is the recipient of the Central Sahitya Academy Award for literature and has translated into English the stories of Odia Sarala Mahabharata, the first regional epic of India. He has also translated many Odia books into English. Formerly professor in English and the Principal of Ravenshaw College, he now lives in Bhubaneswar.

About BLACK EAGLE BOOKS:   Satya Pattanaik, Director, Black Eagle Books, (Dublin, Ohio) is a reputed poet and translator. Collaborating with like-minded friends, he founded BLACK EAGLE BOOKS on 1 April 2019 with the goal of propagating Indian literature globally and bringing out-of-print books back to business. He believes in the global presence of each literary work; he advocates editing and translation. He has a dream – to see an Odia writer getting the Nobel award in the next 10-15-20 years. He is willing to collaborate with such dreamers to make this happen. He has a goal of publishing 500 books in a span of five year