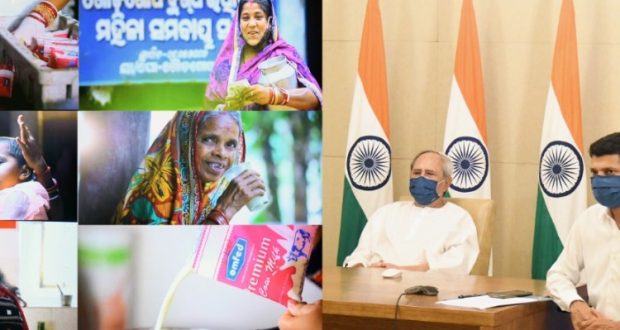 Speaking on this occasion, Chief Minister first congratulated the Indian Men’s Hockey Team for historic success in the Tokyo Olympics and said, “We are all proud of the unique achievements of the Indian hockey team.”

The Chief Minister said that the state government has always been with the poor and is working to protect their interests. Naveen said that more than Rs 2,000 crore has been deposited in the accounts of small shopkeepers, small farmers, Mission Shakti mothers to reduce the impact of the Covid pandemic on the poor.

The Odisha CM said that livestock farming would boost the livelihoods of small farmers as well as boost the rural economy. He said that the state government aims to increase the milk production and further improve the nutrition level of the state.

Further, the Chief Minister said that the state government has been providing a number of schemes for dairy farmers. He encouraged the people to take benefits of the scheme and help achieve the target.

At the event, three farmers from Bargarh, Nabarangpur and Cuttack spoke to the Chief Minister and thanked him for his special assistance. Mrs Satyavati Sahu from Bargarh, Mr Khokan Biswas from Nabarangpur and Mrs Vijayalakshmi Swain from Cuttack, said the state government has been providing a lot to support them in dairy farming. With their financial improvement through dairy farming, they said, they have been able to educate their children and built their houses.

Secretary to Odisha Chief Minister & 5T, V.K. Pandian coordinated the event. The Secretary of the Department of Fisheries & Animal Resources, K. Raghu delivered the welcome address and the Director offered the vote of thanks.