in Literature, State News August 5, 2021 Comments Off on Noted writer Paramita Satpathy To Be Conferred With Sarala Puraskar for her novel ‘Abhipreta Kala’ 490 Views

Bhubaneswar:5/8/21:Noted writer Paramita Satpathy will be awarded the prestigious Sarala Puraskar instituted by IMFA’s charitable wing IMPaCT for her novel ‘Abhipreta Kala’ which has been published by Paschima Publications, Bhubaneswar in the year 2016.

Satpathy will be receiving the 42nd edition of the foremost literary award of Odisha. She will be given away cash reward of Rs.5,00,000 (Rupees Five Lakh) along with a citation.

In view of the COVID pandemic, this year, Paramita will be felicitated with the award personally as the ceremony will not be organised in the usual manner.

Paramita has penned seven short story collections and several other novels. Her short story collection ‘Prapti’ was recognised with India’s top literary honor, the Kendriya Sahitya Akademi award for Odia in 2016. Some of her other major works include Narikabi O Anyamane, Kurei Fula and Birala Rupaka 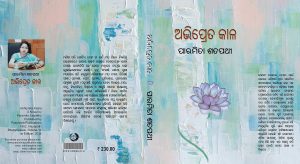 Among other accolades, Paramita has also been felicitated with the Odisha Sahitya Akademi Award in 2006 and Bharatiya Bhasa Parishad Yuva Puraskar in 2003.

Daughter of renowned writers, Sahitya Akademi Award winner poet Pratibha Satpathy and Nityananda Satpathy, Paramita is an influential voice in the Indian literary fraternity. Many of her works have been translated into various other languages.

The annual Sarala Puraskar instituted by eminent Odia industrialist late Dr. Bansidhar Panda and Late Mrs. Ila Panda in the year 1980, has been continuously awarded by Indian Metals Public Charitable Trust (IMPaCT), the charitable wing of IMFA Ltd., the leading and the only fully integrated producer of ferroalloys in India.

In a press statement, the IMFA has informed that the Bansidhar-Ila Panda Sangeet Sammana & Chitrakala Sammana will be declared soon. Details of the awardee in the previous  year given below: