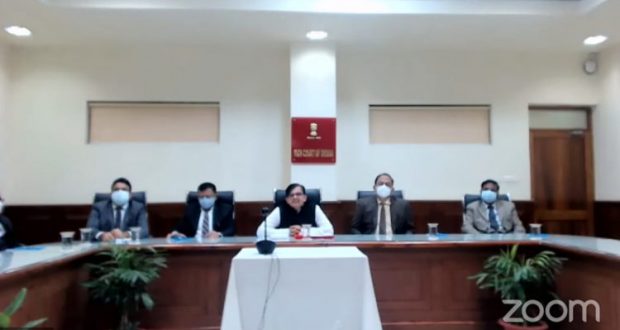 Cuttack2/8/21:: The Chief Justice of Orissa High Court Dr Justice S Muralidhar, on Monday launched multiple e-Services and commencement of live streaming of court proceedings of the Court of Chief Justice for the benefit of the litigants and Advocates of the justice delivery system at large.

The e-services such as High Court’s mobile app, facility of online payment of fines in cases before District and Subordinate Courts, the system of virtual courts for dealing with traffic e-challan cases in Bhubaneswar-Cuttack Commissionerate area were launched.

Addressing a gathering of Judges of the High Court, District Judges, the Advocate General; DG of Police; Commissioner of Police, Cuttack and Bhubaneswar; Transport Commissioner-cum-Chairman, State Transport Authority and other dignitaries, Justice S Muralidhar emphasized upon the intended benefits of ushering in technology into the day-to-day work of the Judicial system and briefly touched upon the purpose of launching the new e-services.

He extended gratitude to the e-Committee of the Supreme Court of India for its consistent endeavour towards bringing substantial changes in the judicial process through use of technology over the past decade and for all the support provided to the High Court in its technological undertaking.

Justice Muralidhar impressed upon the Judicial Officers and members of the Bar to work in cohesion and to give their best in fulfilling the expectations of the common man from the justice delivery system.

Speaking about the concept of live streaming of court proceedings, Justice Muralidhar informed that live streaming will commence in his court on a trial basis.

He highlighted that ultimately the aim of resorting to live streaming is to enhance accessibility and transparency of court proceedings.

He urged everyone to share their feedback with the Court on all its undertakings including live streaming assuring that every constructive feedback shall be promptly considered.

The Advocate General of Odisha hailed the recent technological advancements made by the High Court of Orissa under the leadership of the Chief Justice and the IT Committee of the High Court.

Detailed guidelines and manuals regarding the High Court’s Mobile App, e-Payment of Fine, virtual courts have been made available on the court’s website.

Live streaming of proceedings of the Chief Justice’s Court commenced at 2 pm on Monday and can be viewed on the official YouTube channel of High Court of Orissa.