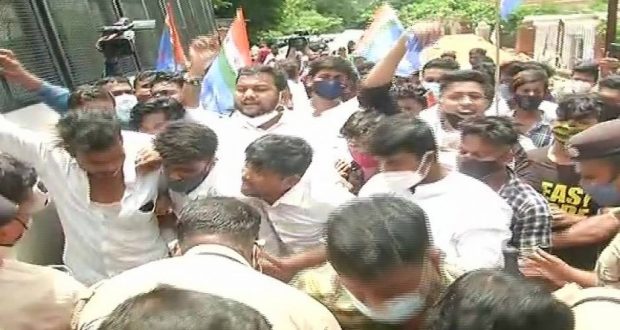 bhubaneswar:2/8/21; Hundreds of members belonging to the Chhatra Congress (Students’ wing of Congress party) today scuffled with the police while trying to barge into the office of the Odisha Staff Selection Commission (SSC) during a protest demanding an investigation into the alleged ‘bribe for recruitment scandal’.

The agitation was carried out at the SSC headquarters following the arrest of Biranchi Sahoo, private secretary to an OSSC member, by the State Vigilance.

The police had a tough time after party activists led by senior leaders like Suresh Routray, Manas Choudhury stormed into the OSSC office.

The protesters alleged that several top officers at the leading recruitment office are involved in the bribery scandal in which Biranchi Sahoo’s arrest was just the tip of the iceberg.

“It is not happening today. The bribe culture has been running at the SSC office for the last 21 years. It has come to light recently only after the bribe share among the officials could not be managed properly. We demand a thorough investigation into the recruitment of ineligible candidates who got job by giving bribes. The fate of deserving candidates has been pushed into oblivion,” said Manas Choudhury, Chhatra Congress leader.

Echoing similar sentiment, another protesting leader alleged that top officials in the department too are involved in the job racket.
“It seems corruption is written on the walls of the SSC office which speaks volumes. Give bribe and take a job. Now a clerk has been arrested. Prior to him, several top officers have involved in it. They all should be exposed,” he added.

Several job aspirants in Odisha have suspected a ‘money for job’ scam which was being operated by Biranchi Narayan Sahoo, the Private Secretary to a member of Odisha SSC who has been arrested by the Vigilance on charges of accumulating disproportionate assets.
Meanwhile, Sahoo was suspended from his post by the government on Monday pending an inquiry against him.