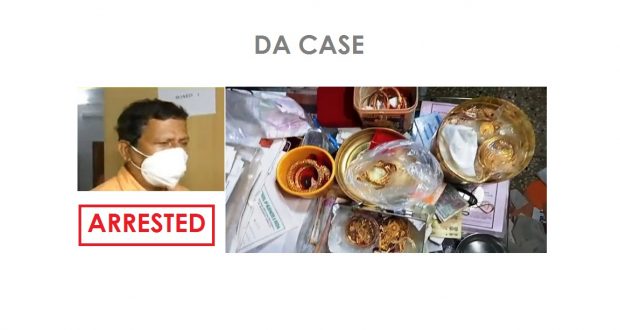 Bhubaneswar: 31/7/21:Private Secretary of Staff Selection Commission Member, who landed in Vigilance net over the allegation of possession of disproportionate assets to his known sources of income, has been arrested.

The PS, identified as Biranchi Narayan Sahoo, was apprehended today following raids on his houses yesterday.

The vigilance officials had conducted simultaneous raids at 6 places including his residential house. During searches, the sleuths of anti-corruption wing traced assets worth over Rs 3.79 crore belonging to the official.

This apart, recruitment-related applicant admit cards and such other incriminating documents have also been recovered during the searches.

2021-07-31
Editor in chief
Previous: Odisha Chief Secretary and 5-T Secretary along with the senior officials visited Kalahandi
Next: Bhubaneswar became the first city in the country to achieve 100 per cent vaccination against COVID-19.