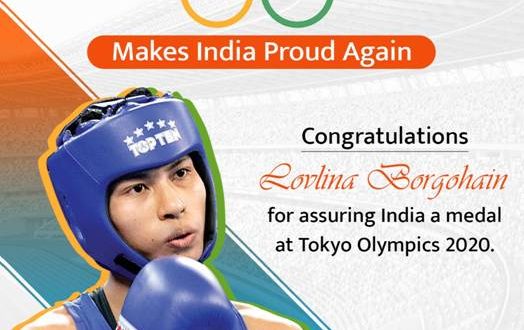 Lovlina Borgohain assures a medal for India at the Tokyo Olympics

in Sports July 30, 2021 Comments Off on Lovlina Borgohain assures a medal for India at the Tokyo Olympics 568 Views

Newdelhi:30/7/21:Minister of DoNER, Tourism and Culture, G.Kishan Reddy said that the enthusiasm for sports and fitness activities in the North East states is a well-known fact. This was evident in my travels to these beautiful lands even before I became the Minister for the Development of the Northeast Region (DoNER).

Now with Lovlina Borgohain guaranteeing us a second medal for India at the Tokyo Olympics, after defeating a former world champion, it fills my heart with pride. Just like me, this is a joyous moment not just for every Assamese but for every Indian. To see a young woman from Baro Mukhia village in Golaghat district, Assam finish at the podium in Tokyo Olympics fills me with so much happiness.

Earlier in the day, the Minister tweeted “Congratulations @LovlinaBorgohai on entering the semi-finals of the women’s welterweight category at #Tokyo2020. The first woman boxer from Assam to qualify for #Olympics is now the first boxer to secure a medal for India at #Tokyo2020”

Lovina’s fighting spirit and never-say-die attitude are well known. Many of us have seen Lovlina train with a gas cylinder during the lockdown. It is this Nari Shakti that the Prime Minister talks about and wants us to celebrate. Lovina’s journey in Tokyo will continue next week in her semi-final bout. India will cheer her on and every household will treat her as one of their own as they watch her land those famous punches. Today, let us celebrate that the two medals that we have won so far are due to two amazing, gritty women who persevered against all odds.