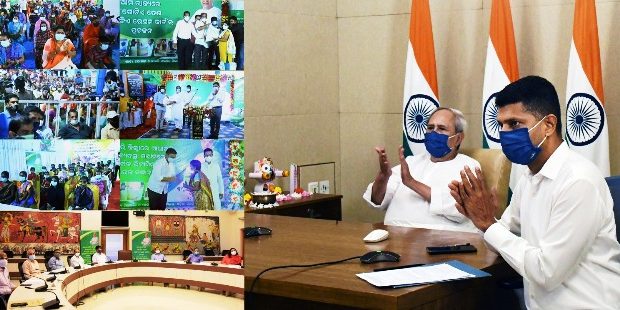 Odisha Chief Minister today launched ‘One Nation, One Ration’ scheme across the State

in State News July 29, 2021 Comments Off on Odisha Chief Minister today launched ‘One Nation, One Ration’ scheme across the State 207 Views

Bhubaneswar:29/7/21: With an aim to strengthen the food security scheme Odisha Chief Minister today launched ‘One Nation, One Ration’ scheme across the State. As the scheme comes into effect, people of Odisha will be able to purchase essential commodities at public distribution shops outside the State. Residents of other States will be able to get the commodities in Odisha as well.

Beneficiaries will get the commodities at 10,578 public distribution shops in the State.

Speaking on the occasion through virtual platform Patnaik said, “Everyone has the right to live with dignity. No one can take away the right from poor section of society. Through various programmes we have been safeguarding the right of people. Our efforts to achieve the purpose for the poor section will continue.”

The Chief Minister also launched another programme under which vitamin-laced rice will be provided to people in Malkangiri district on a pilot basis. He hoped the vitamin-laced rice containing Vitamin B-12 and Folic Acid will be quite helpful to improve the health of girls and women.

“Our aim is to ensure no poor get deprived of the food security scheme,” he added.

On this occasion, Food and Consumer Welfare Minister Ranendra Pratap Swain elaborated on the State Government’s schemes directed towards food security of the poor people. Odisha is one of the forerunners in India in terms of food security, he said.

Speaking at the programme at Malkangiri, Sports and Youth Affairs Minister Tusharkanti Behera. He praised CM’s vision for the development of tribal and poor people.

At Berhampur, Forest and Environment Minister Bikram Keshari Arukha were present. In Bhubaneswar, Minister Ashok Kumar Panda said, “It is because of our CM’s vision and leadership, Odisha has become a model for other States.”

MLAs Purnachandra Bak, Bikram Panda and Ananta Narayan Jena were also present in the programme which was held over video conference.