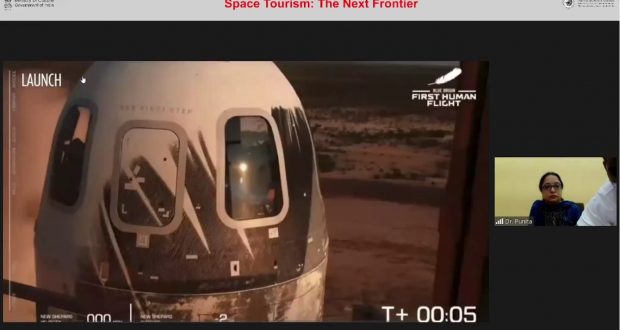 The concept of Space tourism or commercial space travel is not new and its history right from the idea conception to reality was discussed by Dr Punita in the online lecture. ‘Space tourism is the space travel for recreational, leisure of business purposes. Space Tourism has been in news recently because of two American billionaires, Richard Bronsan and Jef Bezos who went into space as tourists using their personal rocket and aircraft’ cited Dr. Punita. 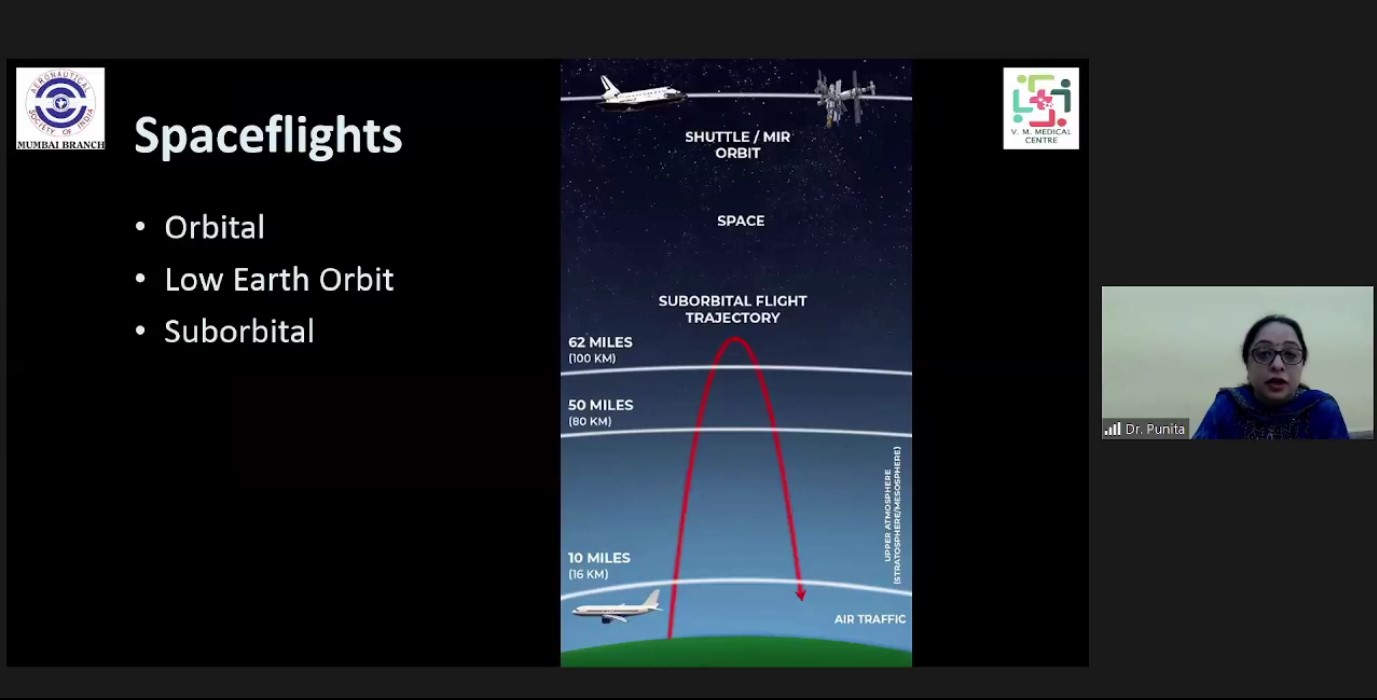 In the lecture, Dr. Punita said that earlier NASA and the Russian Space Agency started taking tourists for space travel. It was exorbitant and process was stringent. Russian Soyuz spacecraft used to take tourists every 6 months. ‘Space Adventures was the first agency in the field of Space Tourism. The agency was started by US billionaire Richard Garriot in 1998. The agency offered brokered rides aboard the Russian Soyuz Rockets’ Dr. Punita informed.

Dr. Punita said, while, both NASA and the Russian Space Agency halted space tourism, industrialists and entrepreneurs thought they could start private missions so that more and more people could travel to space. This gave birth to the concept of Space tourism.

In her lecture, Dr Punita said Dennis Tito was the first commercial spaceflight passenger before which only astronauts went to the space for research purposes. Tito went to space on the Russian Soyuz TMA Launch Vehicle in April 2001. Mark Shuttleworth, Greg Olsen, Anoush Ansari, Charles Simony, Richard Garriott, Guy Laliberte were others who went on paid trips to space between 2002 to 2009. The private space travelers had to go through stringent selection standards, extensive training, and adopted measures of counteract challenges.

Dr. Punita also discussed in detail the various companies that are working in the field of private space travel:

SpaceX is an American aerospace manufacturer, founded in 2002 by Elon Musk of Tesla Motors. The company has developed the Dragon Spacecraft which was used by NASA astronauts to go the International Space Station. Space X is planning to send citizens to the International Space Station on a 10-day paid trip. Space X is also planning trips to the moon and Mars. 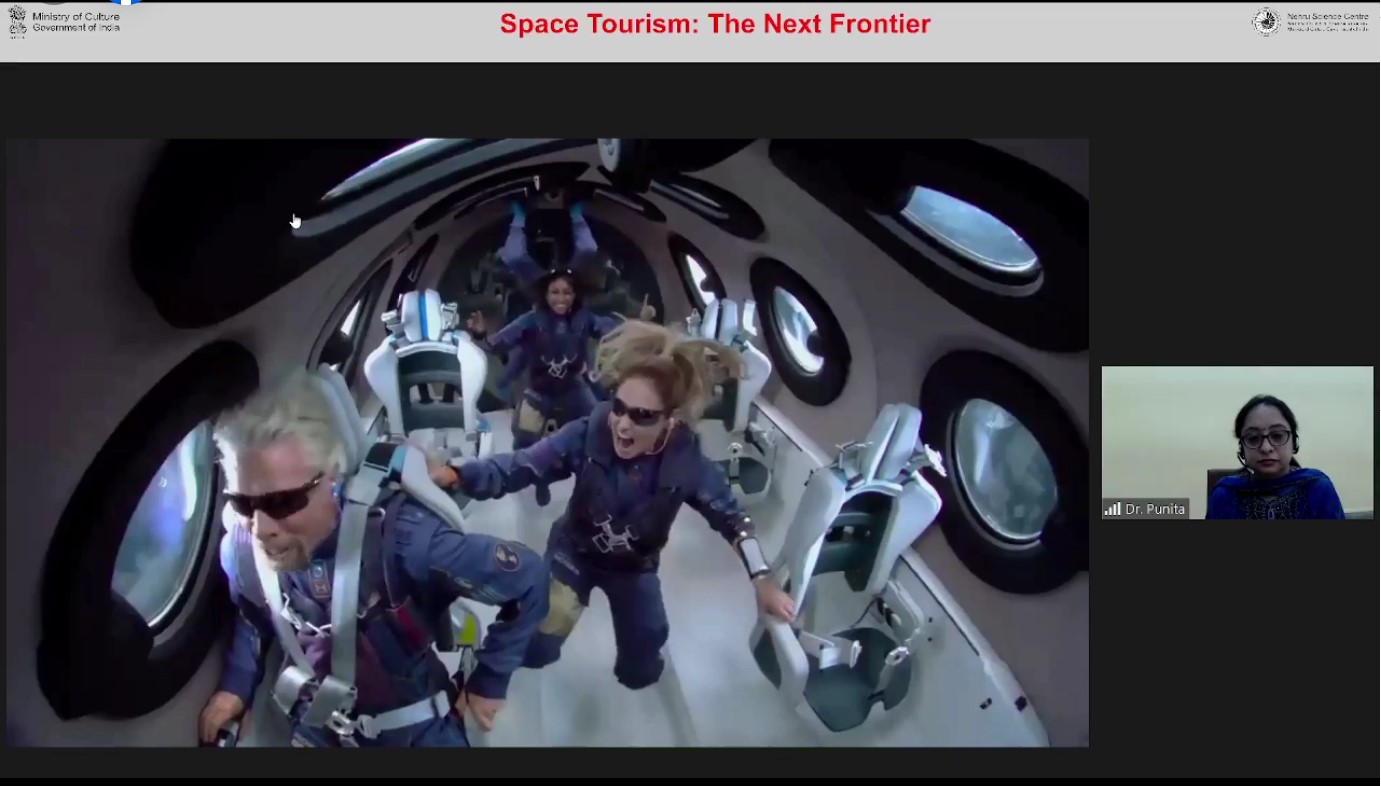 Dr. Punita informed that while all these missions just offer a ride to the space, the NASA recently has allowed to take private citizens to the International Space Station for a short visit. Companies like Axiom Space are involved in the training of private astronauts. The company is also planning Private Space station in future.

In the lecture, Dr. Punita also explained the basic terminologies involved in space tourism like orbital flights, sub orbital flights, low earth orbits. According to the Fédération Aéronautique Internationale an altitude above 100km above sea level i.e., Kármán Line is space. The same agency considers an altitude of 50 miles (80.47km) as the altitude to qualify as spaceflight.

DR. Punita discussed the science involved and risk, awareness, concerns, and medical informed consent which are essential part of the tourism. She further explained what could be possible post flight medical problems or conditions and impact of space travel on human body and brain.

About the Nehru Science Centre

About the National Council of Science Museums

National Council of Science Museums, the apex body of Science Centres and Science Museums in India, functions under the Ministry of Culture, Government of India as an autonomous scientific organisation. It coordinates the activities of 25 Science Centres across the country. The Council specializes in developing Science Centres and Museums, the state-of-the-art interactive exhibits and programmes and human resource development in science communication. The Council also has distinction of developing a Science Centre on turnkey basis for Mauritius.   It organizes nationwide scientific events and activities for the school students. Besides the IAO, the council also is known for events like the National Science Seminar, National Science Drama Contest, and Science Expo etc. The Council serves about 10 million visitors which includes 25% students, through its interactive galleries in various science centres and 22 travelling Museum Buses for rural areas and other events and activities. 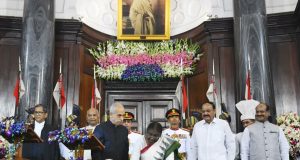