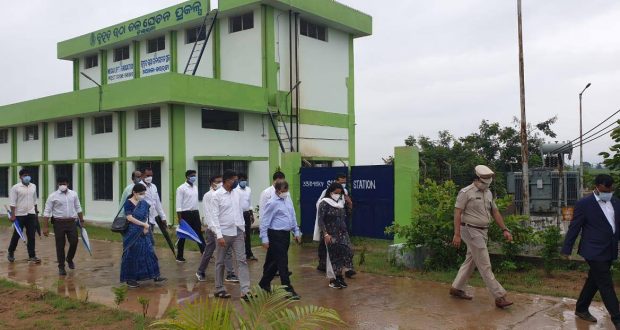 Koraput/ Nabarangpur:28/7/21:As per the direction of CM Shri Naveen Patnaik, Chief Secretary Suresh Mohapatra and Odisha 5T Secretary VK Pandian along with senior officials visited Koraput and Nabarangpur districts, to review preparedness for a possible 3rd wave of COVID19 and the progress of various development projects.

The officials directed the completion of PSA and LMO Plant projects in the districts before August. During their visit to the construction site of 650-bed Hospital in SLN MC & H, Koraput, 5T Secretary suggested patient amenities should get priority and facilities should be ensured.

Pandian this morning along with other senior administrators, including Principal Secretary of Water Resources Anu Garg, R. Vineel Krishna, Special Secretary to the Chief Minister, and the Director of NHM Salini Pandit, will visit Koraput and Nabarangpur districts.

2021-07-28
Editor in chief
Previous: NABARD has sanctioned Rs 356 crore to the Odisha government for construction of 35 bridges.
Next: Odia film ‘Maa ra Mamata’ is all set to release soon.