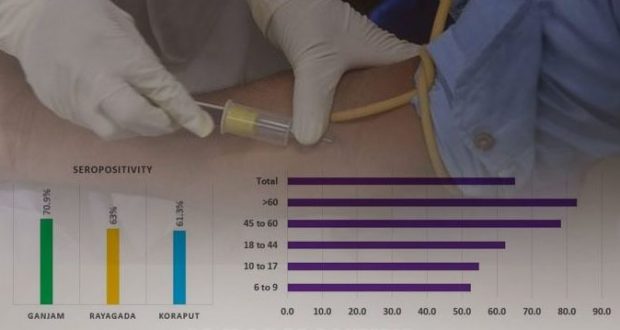 Overall 65.12% of the general population and health care workers in Odisha have developed antibodies against Covid-19

Bhubaneswar:24/7/21: Overall 65.12% of the general population and 85.83 percent of health care workers (HCWs) in Odisha have developed antibodies against Covid-19, as per the findings of the fourth round of the nationwide Sero Survey for Covid-19.

The fourth round of the nationwide Sero Survey had kicked off in three Odisha districts – Rayagada, Ganjam, and Koraput – in the third week of June this year. Samples of 1230 general population and 311 HCWs had been collected.

As per reports, 70.9 percent of seropositivity was found in the samples collected from Ganjam, 63 percent in Rayagada, and 61.3 percent in Koraput.