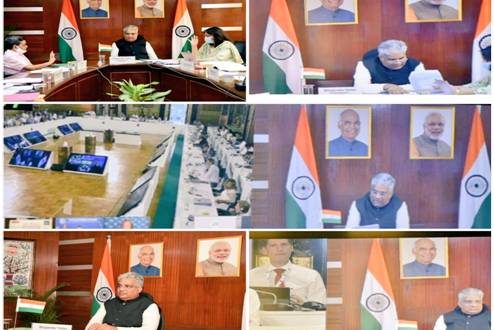 World has waited long enough for the delivery of promised Climate finance and technologies at low cost: Bhupender Yadav

in Environment, National July 23, 2021 Comments Off on World has waited long enough for the delivery of promised Climate finance and technologies at low cost: Bhupender Yadav 253 Views

Newdelhi:23/7/21:On the second and concluding day of the G20 summit, Shri Bhupender Yadav, Minister for Environment, Forest and Climate Change stressed that the G20 must respond to the call of science for urgent global climate action in this decade.

Speaking at different sessions on Climate Change, the Union Environment Minister underlined the need to cut absolute emissions rapidly while taking into account the Paris Agreement which emphasized respective historical responsibilities, delivery of promised climate finance, and technologies at low-cost keeping in perspective per capita emissions, differences in per capita GDP and the unfinished agenda for sustainable development.

Shri Yadav stated that India remains steadfast in its commitments to join and lead efforts to combat climate change within the multilaterally agreed convention and its Paris Agreement.

The Minister stressed, common but differentiated responsibilities to combat climate change, as per respective capabilities and national circumstances lies at the heart of the UNFCCC & its Paris Agreement. “We should not be shifting goalposts and setting new benchmarks for global climate ambition”, said Shri Yadav and informed that under the visionary leadership of Prime Minister Shri Narendra Modi, India has exhibited exemplary resolve by achieving its pre-2020 voluntary commitment of reducing emission intensity.