Today talent emerging from small towns are being noticed and nurtured because they are receiving  the best facilities and professional training to compete at the highest level: Sh Anurag Thakur

under the leadership of Prime Minister Narendra Modi, over the past few years, the groundwork has been done to ensure India becomes a sporting powerhouse: Shri Anurag Thakur

Speaking on the occasion , Shri Anurag Thakur said that India’s road to Tokyo Olympics has been a journey filled with tests and triumphs, both for athletes and organisers, in so many ways, quite like the Olympic games themselves!

Shri Thakur further said that we have put sportspersons and their interests at the centre of policy planning with a forward looking vision. In the last seven years we have revamped and expanded India’s sports infrastructure. Today talent emerging from small towns is being noticed and nurtured, because they are receiving best facilities and professional training to compete at the highest level. We’ve also brought a fresh outlook towards building a sports culture in the country. Shri Thakur added that under the leadership of Prime Minister Narendra Modi, over the past few years, the groundwork has been done to ensure India becomes a sporting powerhouse.

Shri Thakur further said the wishes of 130 crore Indians will inspire the 127 Olympic athletes who will showcase their best on the grandest stage in sports. It is a moment of great pride as we cheer for the Indian contingent in the Olympic Games in Tokyo today. 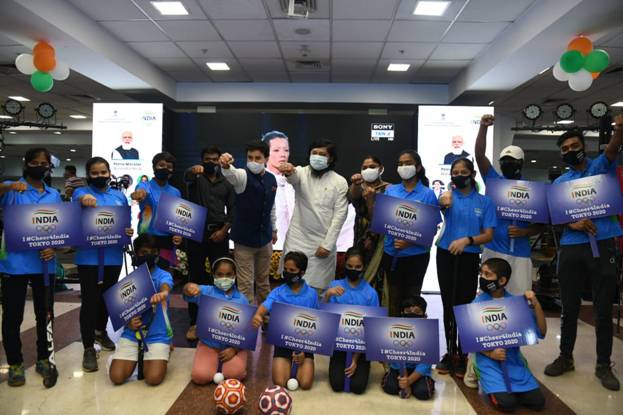 MoS Shri Nisith Pramanik said that the Eastern part of the country has also contributed outstanding sportspersons like  Mary Kom and Hima Das among others may it be from Orissa, or Bengal or Manipur.

During the conversation, four-time Olympian Yogeshwar Dutt said that the yearning for medals being seen in sportspersons will make India win. Remembering her win in Olympics India’s first female medalist Ms Karnam Malleswari said it brought tears to her eyes when then Prime Minister called her “Daughter Of India”. Former Indian Badminton Player Pullela Gopichand said that for me the sporting ecosystem and development of sports in the country is what really pushes me, I have seen a distinct transformation in sports and support from the people.

MoS of Railway Ministry Smt Darshana Jardosh highlighted the fact that out of 25 representatives from Railways 21 are women and said she is confident of India winning medals. MoS of Railways Ministry Shri Raosaheb Danve said that Indian Railways have good coaches for the training of the athletes. We are working to develop Railways’ Centres of Excellence for Sports in the near future, which will provide world-class training and other facilities to the players, the Minister added. Haryana Sports Minister Shri Sandeep Singh said that a large number of athletes representing India at the Tokyo Olympics are from the state of Haryana and hoped they will bring laurels to their country by winning medals. The  Minister of Sports,, MP, Ms Yashodhararaje Scindia said that if we provide our athletes with the right training, facilities and coaching, the chances of their winning medals become very bright.

During his interaction with Sony Studio, Shri Anurag Thakur said that we are trying to focus on the development of sports by creating infrastructure and organising sporting events like Khelo India Youth Games, Khelo India University Games and Khelo India School Games. We will try to hold big sporting events in the country. Another focus would be producing good quality coaches. And finally giving employment opportunities to athletes would encourage them to adopt sports as a career.

Later the dignitaries viewed the live screening of the Olympic Opening Ceremony at the venue of the event accompanied by loud cheers for the Indian contingent as it marched across the National Stadium in Tokyo. India will be sending their largest-ever contingent of 127 athletes in 18 disciplines at these Olympics which also includes the highest female representation of 56 athletes.

2021-07-23
Editor in chief
Previous: Call on Prime Minister by PGA-elect and Foreign Minister of the Maldives Abdulla Shahid
Next: World has waited long enough for the delivery of promised Climate finance and technologies at low cost: Bhupender Yadav