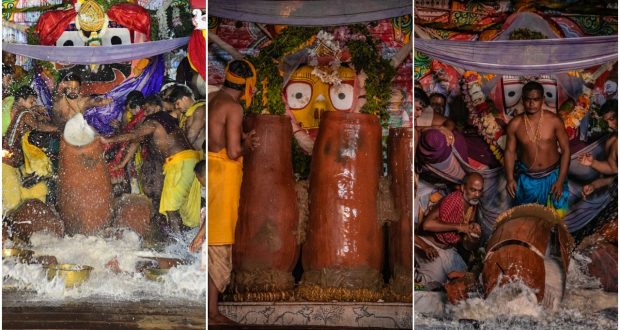 PuriPuri:22/7/21:: Lord Jagannath, Balabhadra, and Devi Subhadra were offered “Adhar Pana” a rich drink on their chariots which the lords dedicated for parswa debatas (guarding deities)and for the salvation of ghostly bodies. Every year devotees try to collect the spilled drink from the underbelly of the chariots but in this corona pandemic situation and standard operating procedure(SOP) issued by the state government all the proceedings of the fete were conducted by servitors without the presence of devotees. The daily nitees for the deities who stayed on their chariots for the third consecutive day began
Today with priests performing Mangal arati, mailum, abakash and offering Gopal bhog along with Sakala dhupa on the chariots. The offering of Adharpana ritual began at about 7.30 PM after the offering of Sandhyadhup bhog. Servitors placed nine large open mouth barrel-shaped clay pitchers with at least one-meter height full of drinks before the three deities on their respective chariots (touching almost their lips) popularly called Adhar pana. 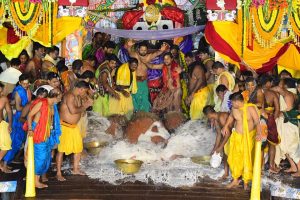 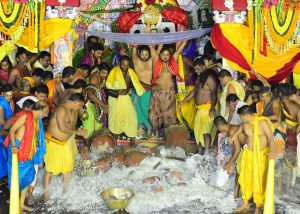 The Priests performed “Shodasa Upachara Pooja’ and offered the drink to the deities beginning with Devi Subhadra then Balabhadra and finally to Lord Jagannath. Soon after the offering was completed these pitchers were smashed, spilling the entire drink on the floor of the chariots. It is believed that numerous spirits, ghostly bodies, and souls trail the lords during the rath yatra eagerly waiting for this moment to get Moksha by consuming the holy drink.
Raghabdas mutt, Bada Odia mutt, and temple administration provide three pitchers each with the drink for the ritual. The drink is a composition of nine rich tasty ingredients along with cheese and cream. The Trinity would remain on their respective chariots tonight and would enter into the main temple sanctum sanctorum on Friday night in a ceremonial Pahandi procession popularly called “Niladri Bije. The administration has made tight security arrangements and enforced the SOP for smooth conduct of the ritual The participation of the devotees was restricted in the fete
2021-07-22
Editor in chief
Previous: DA to pensioners increased for Central Government pensioners
Next: Significant improvement in India’s score in United Nation’s Global Survey on Digital and Sustainable Trade Facilitation