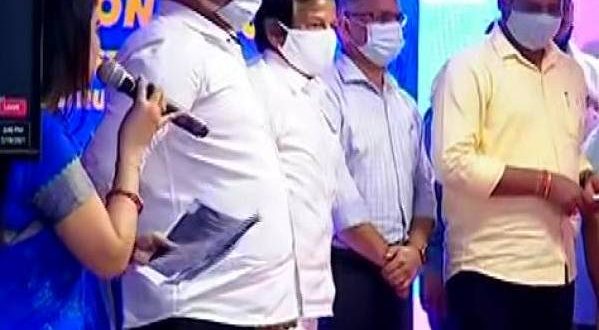 in Sports July 19, 2021 Comments Off on Odisha Sports Minister Lays Foundation Stone Of Cricket Academies Across the state 237 Views

Cuttack:19/7/21: Sports and Youth Affairs Department Minister Tusharkanti Behera today laid the foundation stones for proposed cricket academies of the OCA across Odisha. The initiative to set up cricket academies is a part of OCA’s Vision 2024.

The academies, run by the Odisha Cricket Association (OCA) will provide an apt breeding ground to produce cricketing talents from all corners of the State.

The proposed cricket academies will have a ground, coach, and proper infrastructure for players. Sports Department Secretary Vishal Dev, OCA Secretary Sanjay Behera, and members of OCA were present on the occasion.

According to Behera, individual profiling of players is being taken up in the State in various sports, and “We are trying to make extensive use of technology,” he said.

OCA secretary Sanjay Behera said, “Despite the extensive damage caused to Barabati stadium during Cyclone Fani, we managed to rebuild the required infrastructure and an international match was held subsequently. It is now our priority to give scope to players from rural areas so that they can represent Odisha at state and national levels.”

At present, only three to four districts in the State have proper turf wickets. The OCA secretary said, “Our plan is to ensure that turf wickets are available in 15 districts in the first phase and it will be completed in next few months. In the districts, which do not have playgrounds, we will ask government to provide playgrounds for necessary development,” he added.

Secretary, Sports Department, Vishal Dev said, “It is a path-breaking initiative. The Vision 2024 by OCA has several crucial components. When we talk about developing specific sports, several issues like infrastructure, coaching are important and the selections should be transparent. All such aspects have been taken care of and it will go a long way in promoting the game and the players will definitely benefit.”