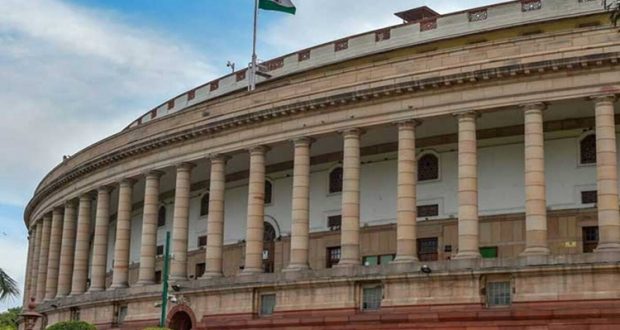 Monsoon Session of Parliament begins today; Both Houses adjourned for the day

in National July 19, 2021 Comments Off on Monsoon Session of Parliament begins today; Both Houses adjourned for the day 259 Views

Newdelhi:19/7/21; Both the houses of parliament have been adjourned for the day. As the House met after post-lunch, the opposition members continued shouting slogans. The Chair adjourned the House till 3.30 PM and later for the day.

As Prime Minister Narendra Modi rose to introduce new Ministers in the Lok Sabha, ruckus began in the house. Opposition members trooped to the well of the house demanding repeal of the farm laws and shouting slogans about rising fuel prices. It is a tradition of the house that the Prime Minister introduces his new Cabinet colleagues on day one of the session.

Prime Minister said, he thought there would be enthusiasm in Parliament as so many women, Dalits and tribals have become Ministers. Mr. Modi said this time many persons from OBCs and the agricultural community have been given berths in the Council of Ministers.

Later, Speaker Om Birla adjourned the House till 2 P.M. Earlier; the Lok Sabha paid tributes to 40 of its former members.

The Rajya Sabha has been adjourned till 2 P.M. following Opposition uproar over price rise, farmers’ issues along with some other issues. When the House met after the first adjournment at 12.24 P.M., Chairman M. Venkaiah Naidu, while making his remarks, said the second wave of the COVID-19 pandemic has tested us severely.  He said the governments and all others concerned had to work overtime to address the bottlenecks in health infrastructure. Mr. Naidu said, despite best efforts, a good number of precious lives have been lost and the need of the hour is to learn from the experiences of the first and second waves so as to be better equipped for the possible fresh bouts of the pandemic that are being talked about. The Chairman expressed confidence that the country will collectively overcome this challenge of the invisible coronavirus. The Chairman said people look up to Parliament in their quest for meeting their aspirations and alleviating their suffering. They are living under the pandemic-induced stress since last year and this Monsoon Session assumes enhanced significance in the context of the prevailing situation in the country.

Amid noisy scenes, Prime Minister Narendra Modi rose to introduce new Ministers in the Union Council of Ministers. Mr. Modi expressed displeasure over the unruly scene in the house saying it is an occasion when women Ministers and Ministers from SC and ST  communities are being introduced, but what is this mentality which can’t see their glory. He said, the house is witnessing such a scene for the first time.

Leader of the house, Piyush Goyal condemned the Opposition for disrupting the introduction of new Ministers. Amid uproar, the Chairman rejected the adjournment motions moved by members from Opposition parties over different issues and adjourned the House till 2 P.M.

Earlier, when the House met this morning, on the first day of Monsoon Session, the proceedings were adjourned for one hour after paying tributes to sitting members Dr. Raghunath Mohapatra and Rajeev Satav. The Upper House also paid homage to ten of its former members including actor Dilip Kumar and former Union Minister Ajit Singh as well as the legendary track and field sprinter Milkha Singh. The Chairman introduced the new Leader of the House Piyush Goyal. Newly elected member from Kerala Abdul Wahab took an oath.

2021-07-19
Editor in chief
Previous: Opposition should ask difficult and stinging questions but should also give opportunity to reply in peaceful environment: PM
Next: Govt announces launch of National Logistics Excellence Awards