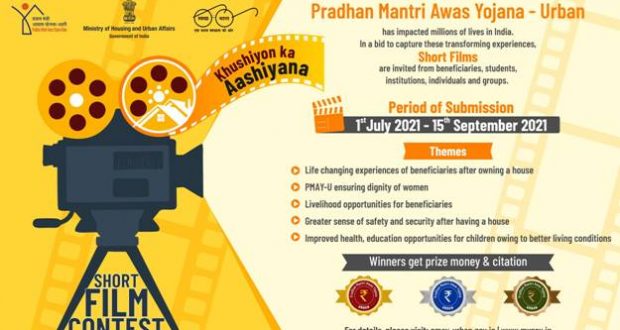 The declaration of the two initiatives by the Ministry of Housing and Urban Affairs (MoHUA) was made on the occasion of sixth anniversary of PMAY-U on June 25, 2021. The momentous occasion also coincided with PMAY-U achieving a major feat. The Cumulative release of Central Assistance under the Mission crossed Rs. 1 Lakh Cr. As the Mission moves ahead to achieve its target of 1.12 Crore houses, more than 83 lakh houses are grounded and more than 50 lakh completed.

Both the initiatives are being implemented on a challenge & competition mode and are among other several events proposed as part of ‘Azadi ka Amrut Mahotsav’, a program of the Government of India ‘to celebrate and commemorate 75 years of progressive India and the glorious history of its people, culture, and achievement’.

The Standard Operating Procedures (SoPs) of both have already been released.

For the short film contest, applications are invited from PMAY-U beneficiaries, students, youth, members of the civil society, institutions, and individual/groups on the broad theme of six years journey of PMAY-U Mission and how it has impacted lives of people, thereby bringing transformation, dignity and enabling empowerment. The competition is open to all Indian Nationals above the age of 18 years and the final date for submission is September 1. The results will be declared onSeptember30, 2021, and 25 each winner will be rewarded in three categories with cash prizes of Rs 25000, Rs 20000, and Rs 12500along with a certificate. 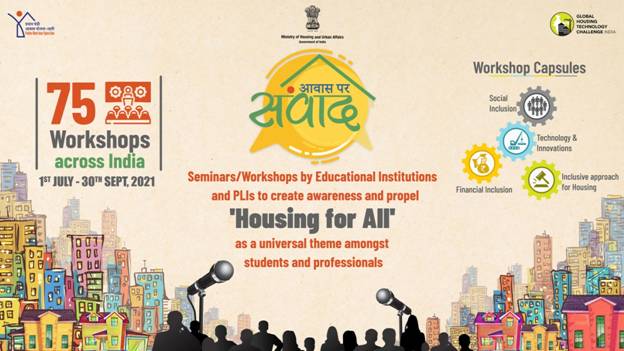 ‘Awas Par Samvaad’ aims to create awareness and promote discussion, deliberation, and dissemination on ‘Housing for All’among multiple stakeholders belonging to varied streams of learning and practices, e.g. engineering, urban community development, planning, finance, etc. This will be done through 75 nationwide workshops and seminars to be conducted between July 1 to September 30, 2021, by educational institutions and Primary Lending Institutions in association with States/UTs. These workshops can be held offline through a classroom model, adhering to all COVID-19 best practices or via online medium. MoHUA will issue certificate of participation to all participants.

Both the ongoing initiatives have been evincing enthusiastic participation and registrations are being currently received. For conducting workshops, educational institutions and PLls can register on the PMAY (U) website: https://pmay-urban.gov.in/ , PMAY-U  Mobile App.

PMAY-U lays constant emphasis on connecting with its beneficiaries and engaging with all stakeholders. The two initiatives will capture the turnaround in peoples’ lives on moving into their own pucca houses, their stories of joy and happiness, and their emotional journeys besides voices and aspirations of all stakeholders.