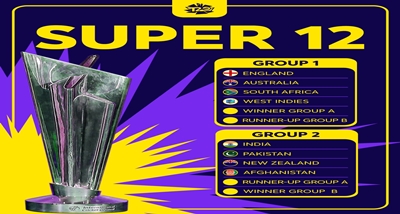 Newdelhi:17/7/21:The International Cricket Council has announced the groups for the T20 World Cup scheduled to be held later this year in the United Arab Emirates and Oman. Arch-rivals India and Pakistan are pooled in the same Group B. This year’s tournament will be played in two stages.

The first stage will be a qualifier from where four teams will reach the Super 12 stage.  Besides six associate nations, Sri Lanka and Bangladesh will also compete in the qualifiers after they failed to earn automatic qualification through their T20I rankings.

England, Australia, South Africa, the West Indies, and the two qualifying nations form the Group A, while India and Pakistan, New Zealand, Afghanistan and two other qualifiers were placed in the Group B.