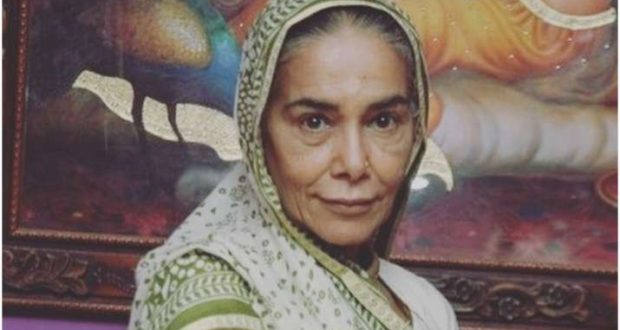 in Entertainment July 17, 2021 Comments Off on As tributes pour in on Surekha Sikri’s demise listen to her Swan Songs 287 Views

Veteran actor Surekha Sikri passed away this morning, Friday the 16th July 2021, following a cardiac arrest, her agent, Vivek Sidhwani informed. In a statement shared with the media, the agent said the actor had been suffering from complications arising from a second brain stroke. She was with her family and her caregivers who requested privacy at this time.

Surekha Sikri (19 April 1945 – 16 July 2021) was an Indian theatre, film and television actress. A veteran of Hindi theatre, she made her debut in the 1978 political drama film Kissa Kursi Ka and went on to play supporting roles in numerous Hindi and Malayalam films, as well as in Indian soap operas. Sikri has received several awards, including three National Film Awards and a Filmfare Award.

As a fitting tribute to the great performer she was we will listen to her mellifluous recitations of Hindi and Urdu Poetry. But before that, here are some of the tributes which poured in on social media and otherwise from her millions of admirers, and eminent people whom she knew, including actors and directors from film, television and theatre.

Ashish Abrol, Income Tax Commisioner, laments: “Surekha Sikri or Surekha di as we called her passed away today morning. I cannot get myself to accept that she is no more. I came to know her in 1985 when she was a faculty member in NSD and came completely under her thrall as she became a mentor, teacher, older sister and a maternal figure for me. Her panache, idiosyncrasies, brilliance as an actor and her erudition… often when her silences taught you more than lectures of so many others. Her love for chaat and the occasional joint… later of course she could not eat much courtesy the intestine problems. She was perhaps the greatest theatre actor ever in modern India; some one who could emote and yet be aware of her own performance as if standing out of her body observing herself perform. More than that she was always overflowing with warmth that traveled to you through her twinkling often mischievous eyes. She was so thrilled when her son Rahul had an exhibition in The Habitat Centre …I was not in touch with her for some time more since her paralysis and with her inability to speak. A triple national award winner; Surekha ji was known to the country at large courtesy her TV and film roles…in Tamas, as Dadisa, in Mammoo but it is her oeuvre in theatre that is stunning; she owned the stage, set it on fire and then doused the flames with her voice and gentleness. RIP Surekha di my mother in another life you live on in your performances and our memories”

“She was one of my personal favourites .. a lovely actress .. will never forget her Nsd work when I was in college in delhi .. god bless her” – Lillet Dubey

“There is a total immersion in life…have deeply admired her work, her persona from the Nsd days, so fully engaged in enjoying everything that came her way intensely” – Amba Sanyal

“Surekha my dear dear friend! We were in the same batch! A consummate actress,very strong woman , determined and brave! ! Never let go of her beliefs and strong options! I shall miss her dearly” – Amal Allana

“Very very sad news. We have lost another great actress. Surekha Sikri left for her heavenly abode. Heartfelt condolences to her family. May God rest her soul in peace” – Satish Anand

“Another great loss to theatre and films. She was a great actor and inspiration to all her juniors at NSD. Will never forget her superb performances. Rest in peace Surekhaji” – Anila Singh Khosla

“Shocking news. She was one of the few who defined theatre for us in our youth. What a great loss for all of us” – Rajiv Bhargav

“Last of the greatest products of NSD..and loved and respected hugely for her talent and principles. Will be sorely missed” – Dolly Thakore