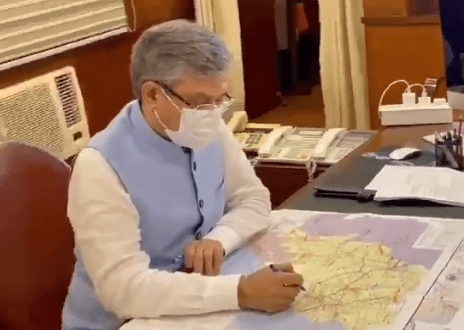 in National, State News July 15, 2021 Comments Off on Railway Minister Aswini Vaishnaw has reviewed the implementation and status of the ongoing railway projects in Odisha 180 Views

Bhubaneswar15/7/21:: The new Railway Minister, Aswini Vaishnaw has reviewed the implementation and status of the ongoing railway projects in Odisha.

The Minister who was elected to the Rajya Sabha from the State had discussed with senior officials of his ministry regarding the pending works in Odisha. Sources said Khurdha-Bolangir railway line was a key subject in his review meeting.

Vaishnaw himself informed regarding the review of the projects by sharing video on his Twitter account. The Minister was seen looking at the railway project map while fixing strategies to expedite the pending works.“The meeting also discussed future developmental aspects of Odisha,” he tweeted.

Just took a review of functioning and implementation of all the on going Railways projects and future developmental aspects of Odisha. pic.twitter.com/MKAusp5pIc

This was his first review meeting with top railway officials on Odisha projects after being sworn-in as the Railway Minister on July 8 in a major expansion of the Union Cabinet.

The people of Odisha have also pinned high hopes in the Minister over introduction more trains, railway connections to six Odisha districts and expediting pending projects.

The Congress party also demanded more projects from him for Odisha. Senior party leader and former Railway Minister Bhakata Das had earlier demanded  early completion of ongoing projetcs and  bringing up new one for the State as he is the Cabinet Minister.

Odisha has long standing demand of bringing the rail network of the State under East Coast railway jurisdiction and expediting the pending projects.

Other challenges before the minister would be stepping up of the Khurdha-Bolangir railway line, introduction of passenger train on Paradip-Haridaspur route, setting up of Rail wagon factory at Sitalpalli in Ganjam and electric locomotive maintenance workshop in Kalahanadi.

Similarly, conversion of Puri and Bhubaneswar railway stations into world class stations would be a major work to be done by him.
Notably, Vaishnaw sought the blessings of Lord Jagannath for the service of Odisha soon after his induction into the Union Cabinet.

2021-07-15
Editor in chief
Previous: Odisha witnesses 2,110 Covid positive in the past 24 hours
Next: A Flight To Remember’: Dayanidhi Maran: DMK MP and former Union Minister