Top Headlines
Home » Sports » Modi told Dutee Chand that “You have made a number of records for this country. The country hopes that you will find a place on the Olympic podium 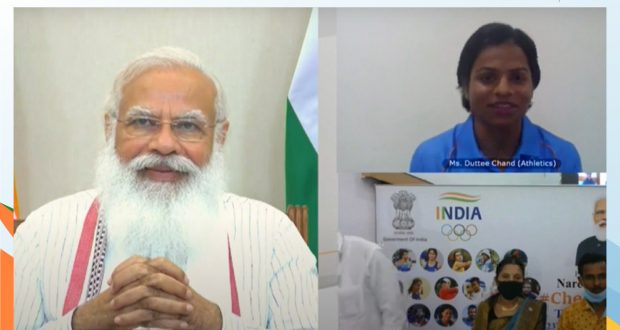 Modi told Dutee Chand that “You have made a number of records for this country. The country hopes that you will find a place on the Olympic podium

in Sports July 13, 2021 Comments Off on Modi told Dutee Chand that “You have made a number of records for this country. The country hopes that you will find a place on the Olympic podium 175 Views

Bhubaneswar:13/7/21: India’s fastest woman Dutee Chand opened her heart out and spoke about the challenges that she faced in her personal and professional life during her interaction with Prime Minister Narendra Modi on Tuesday.

The Prime Minister spoke to Indian sportspersons who will be representing the country in the upcoming Olympic Games in Tokyo.

While interacting with the PM, Dutee said, “This will be my second Olympics. I just want to show that no woman is less or weak in India. Women will progress and will bring pride to the country. I want to win a medal for this country.”

“Sports has given me and my family a better life after the struggles in the initial days of my life. I would like to thank you (PM) and Odisha Chief Minister and everyone who has helped me to achieve that. My life has been surrounded by controversies. There have been a lot of challenges I had to overcome to get here,” she said.

The Prime Minister also wished to know about her preparation and said a few seconds decide an athlete’s years of practice. Dutee said there will always be nervousness and fear in the mind but as always, she hoped to overcome everything and see the Tricolour unfurl after the races.

Modi told Dutee that she should take part in the Olympics without getting bogged down by expectations. “You have made a number of records for this country. The country hopes that you will find a place on the Olympic podium. Let go of all your worries and participate, the whole of India is with you,” he said.

2021-07-13
Editor in chief
Previous: Ashwini Vaishnaw and Dharmendra Pradhan inducted in Cabinet Committee
Next: Odisha government ordered that no Kaudias will be allowed to congregate, carry water from religious places