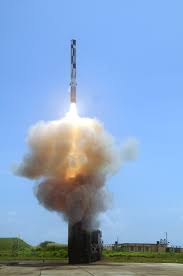 in District Diary, National July 13, 2021 Comments Off on BrahMos supersonic cruise missile failed to take off during a test firing 256 Views

Balasore:132/7/21:The BrahMos supersonic cruise missile failed to take off during a test firing carried out on July 12 off the Odisha coast. The missile was test-fired from Chandipur Integrated Test Range (ITR) launch pad-5 in Balasore. Developed by Brahmos Aerospace, the missile can strike targets 450 km away.

The missile fell off “very shortly” after the launch this morning, as per the report. Prima facie the missile seemed to have failed due to issues with the propulsion system but the exact cause would be known only after complete test analysis, the report said.

“The reasons for the failure would be analysed by a joint team of scientists from the Defence Research and Development Organisation (DRDO) and BrahMos aerospace corporation,” sources told the news agency.

Moneycontrol could not independently verify the report.

The extended range version of the missile was being tested which is capable of hitting targets up to 450 kilometres.

This was a rare instance where the BrahMos missile did not meet the desired standards during test firing. India has earlier successfully tested the supersonic cruise missile on a number of occasions.

The BrahMos missile is produced by an Indo-Russian joint venture and it can be launched from submarines, ships, aircraft, or land platforms. The BrahMos supersonic cruise missile range derived its name from two rivers, the Brahmaputra in India and the Moskva in Russia.

It is considered to be the world’s fastest supersonic cruise missile, as well as the fastest anti-ship cruise missile in operation.

2021-07-13
Editor in chief
Previous: Services at different petrol pumps of the state have been disrupted due to strike of Navnirman Yuva Chhatra Sangathan
Next: PM interacts with Indian athletes’ contingent bound for Tokyo Olympics