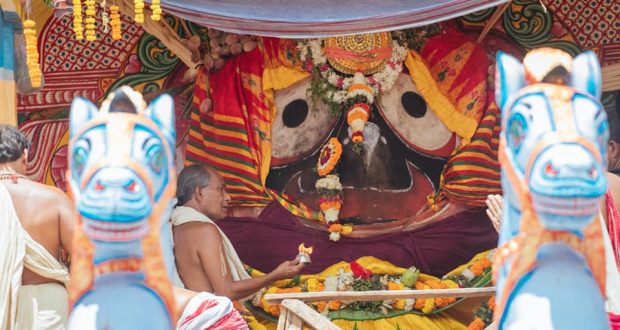 ‘Adapa Mandapa Bije’, was carried out amid religious fervour at the Gundicha temple

in State News July 13, 2021 Comments Off on ‘Adapa Mandapa Bije’, was carried out amid religious fervour at the Gundicha temple 278 Views

The deities, who reached their aunt’s house on Monday, stayed put on the majestic chariots for a day. As the Pahandi began at around 5:30 pm, chants of ‘Hari Bol’ and sounds produced by gongs and conches reverberated through the air creating a divine atmosphere. 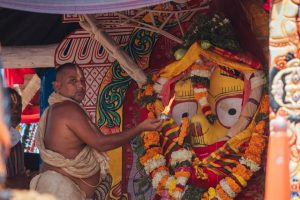 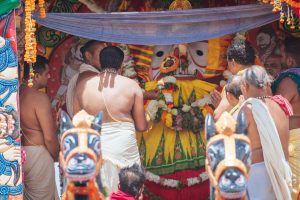 ‘Goti Pahandi’ was conducted outside the Gundicha temple with Lord Balabhadra being escorted to the ‘Ratna Sinhasana’ first followed by Devi Subhadra and Lord Jagannath. The Daita servitors carried out the ceremonial procession after the Sandhya Dhupa ritual.

Cooked ‘prasad’ called Adap Abhada would be offered to the deities today. As Rath Yatra is being organised amid COVID restrictions, devotees were not allowed to participate in the rituals. At the Adapa Mandapa, the special Banakalagi ritual will be performed by the Dutta Mohapatra servitors.

“In this ritual, different types of natural colours like Hingula, Haritala, Kasturi, Keshar, and the glue of Kaintha will be used to prepare Banaka to decorate the deities,” an elderly Sevayat of Jagannath temple said. The deities will stay at Gundicha temple for a week during their nine-day Rath Yatra festival.

2021-07-13
Editor in chief
Previous: Odisha government ordered that no Kaudias will be allowed to congregate, carry water from religious places
Next: Total of 295 fresh Covid-19 cases were reported from Bhubaneswar :12 more have lost their battle to Covid