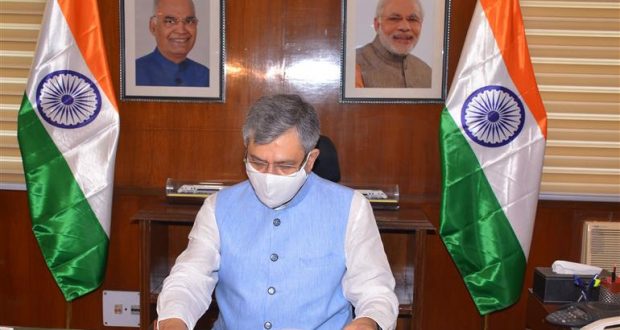 Newdelhi:9/7/21:Hours after taking charge as new Railway Minister in Prime Minister Narendra Modi’s new cabinet, Ashwini Vaishnaw has directed all the officials of his team to work in two shifts.

In an official note released on Thursday night, the railway ministry has directed that the first shift will start at 7 a.m. and end at 4 p.m. while the second shift will start at 3 p.m. and end at 12 midnight. Railway Ministry spokesperson DJ Narain said that the order has been issued only for MR (Minister of Railways) cell and not private or Railway staff. Narain said that the Minister of Railways has directed that all the offices and staff of the minister’s office will work in two shifts.

“It’s for officers in MR cell only as is written in the note and it means — ‘Miles to go before we sleep!’ So much is to be done and every minute counts for the Railways on a mission mode. MR cell means minister’s office, not private, Railway staff,” he added.

Vaishnaw, a former IAS officer, was appointed as the Minister of Railways, Minister of Communications, and Minister of Electronics and Information Technology on Wednesday. He took charge of the ministries on Thursday morning.

Piyush Goyal had earlier headed the railway ministry. In the latest cabinet reshuffle, Goyal has been given charge of the Ministries of Commerce and Industry, Consumer Affairs, Food, and Public Distribution and Textiles.