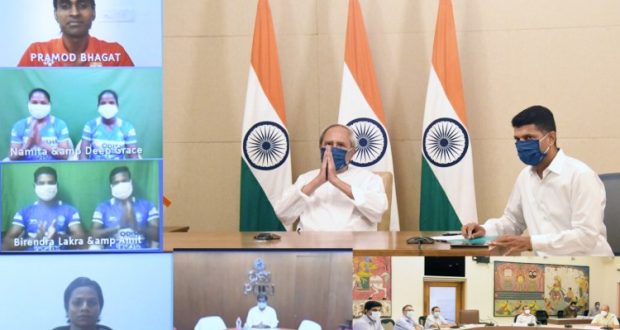 in Sports July 8, 2021 Comments Off on Odisha  Chief Minister announced cash prize for each of the athletes who have qualified for the Olympics 276 Views

Bhubaneswar:8/7/21: Odisha  Chief Minister Naveen Patnaik today encouraged the Olympians from Odisha, who are participating in the Tokyo Olympics to be held in two weeks.

Congratulating Olympians Dutee Chand, Pramod Bhagat, Deep Grace Ekka, Namita Toppo, Birendra Lakra, and Amit Rohidas, the Chief Minister said “You have become a role model for the youth of Odisha. You are a source of pride for your family and for all of us.” The Chief Minister hoped that the Olympians would win medals through hard work, determination, and discipline

On the occasion, the Chief Minister announced prize money of Rs 6 crore for gold medal, Rs 4 crore for silver medal and Rs 2.5 crore for bronze medal winners. He also announced Rs 15 lakh for each of the athletes who have qualified for the Olympics.

Participating in the event, Sports Minister Tusharkanti Behera congratulated the athletes and hoped that their success at the Olympics would bring glory to Odisha in the field of sports.

On the occasion, all the players gave their personal opinions and said that they would do well in the Olympics to bring glory to the state and the country. They also thanked the state government for its cooperation and the Chief Minister for encouraging them.

Secretary of Odisha Chief Minister & 5-T, VK Pandian, inquired the participants about the preparations for the Olympics and their needs.

2021-07-08
Editor in chief
Previous: Chief Minister Naveen Patnaik today sought blessings of Lord Jagannath for the smooth conduct of Rath Yatra amid Covid-19 restrictions
Next: Odisha government has substantially reduced the timeline for the issue of various miscellaneous certificates and landed property mutation