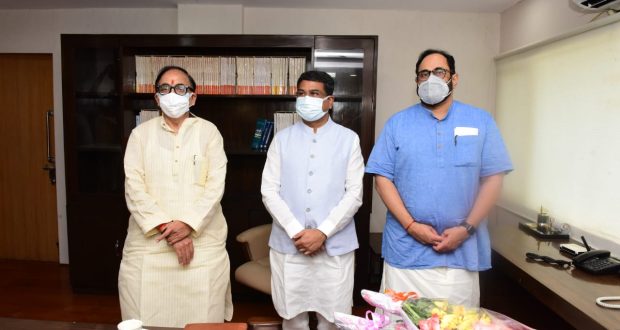 in National July 8, 2021 Comments Off on Dharmendra Pradhan takes charge as Minister of Skill Development and Entrepreneurship; Rajeev Chandrasekhar joins office as Minister of State 300 Views

Shri Dharmendra Pradhan said he was committed to strengthen the skilling efforts of the ministry and equipping the youth with necessary skills to prepare them for Future of Work, and creating linkages between skilling and employment. He also extended his wishes to Shri Rajeev Chandrasekhar on his assuming charge as MoS, and said he was looking forward to working together to give impetus to entrepreneurship and fulfil Prime Minister Narendra Modi’s vision of making India the skill capital of the world.

Shri Rajeev Chandrasekhar said he was privileged and honoured to serve as MoS in the Skill Development and Entrepreneurship Ministry, adding he would work hard to realise the Prime Minister’s vision of a Digital, Skilled and New India.

2021-07-08
Editor in chief
Previous: Railways, Communication and Technology touch the lives of all Indians. I will work to fulfill the Prime Minister’s vision – Ashwini Vaishnaw
Next: PM Modi chairs 1st revamped Cabinet meeting after reshuffle; Over Rs 23,000 crore package announced for emergency response to COVID-19