Top Headlines
Home » State News » Odisha”s Ashwini Vaishnaw and Biseswar Tudu has been inducted into the Union Cabinet of Modi 2.0. 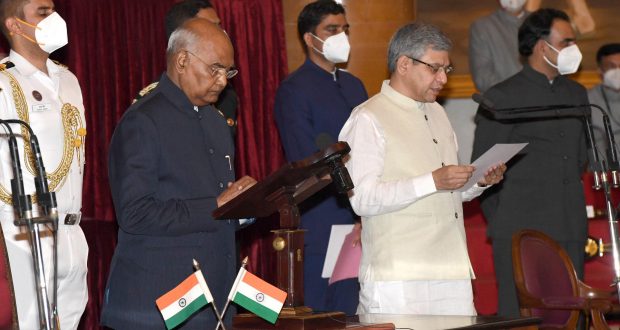 The President, Shri Ram Nath Kovind administering the oath as Cabinet Minister to Shri Ashwini Vaishnaw, at a Swearing-in Ceremony, at Rashtrapati Bhavan, in New Delhi on July 07, 2021.

Odisha”s Ashwini Vaishnaw and Biseswar Tudu has been inducted into the Union Cabinet of Modi 2.0.

in State News July 7, 2021 Comments Off on Odisha”s Ashwini Vaishnaw and Biseswar Tudu has been inducted into the Union Cabinet of Modi 2.0. 238 Views

Newdelhi:7/7/21:Rajya Sabha member from Odisha Ashwini Vaishnaw has been inducted into the Union Cabinet of Modi 2.0.

Interestingly, BJD president Naveen Patnaik had first announced Vaishnaw’s candidature for Rajya Sabha in 2019 but later backed him as a BJP candidate. 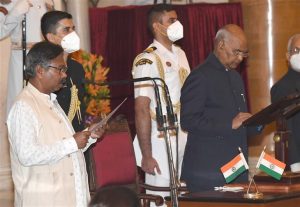 Mayurbhanj MP Biseswar Tudu will also be sworn in as a Union Minister. Earlier in the day, Union Minister and Balasore MP Pratap Sarangi had resigned as Minister of State for Animal Husbandry, Dairying and Fisheries and Micro, Small and Medium Enterprises. A total of 12 Union Ministers had quit ahead of the reshuffle.

2021-07-07
Editor in chief
Previous: Modi Cabinet reshuffle:43 leaders take oath today as part of the Cabinet expansion
Next: President of India, as advised by the Prime Minister, has directed the allocation of portfolios