Top Headlines
Home » National » Digital India has realized the spirit of One Nation – One MSP: PM 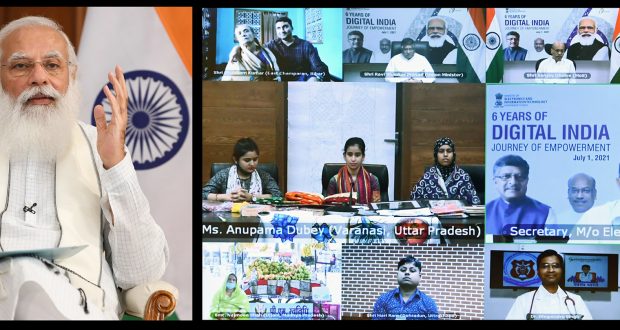 The Prime Minister, Shri Narendra Modi interacting with the beneficiaries of Digital India, on the occasion of the 6th anniversary of Digital India Abhiyan, through video conferencing, in New Delhi on July 01, 2021.

Digital India has realized the spirit of One Nation – One MSP: PM

in National July 1, 2021 Comments Off on Digital India has realized the spirit of One Nation – One MSP: PM 348 Views

Speaking on the occasion, the Prime Minister said India has shown both passions for innovation and the ability to adapt those innovations rapidly. Digital India is the resolve of India. Digital India is the instrument for AatmaNirbhar Bharat. Digital India is a manifestation of a strong Indian that is emerging in the 21st Century. The Prime Minister evoked his mantra of Minimum Government – Maximum Governance and explained how Digital India is empowering the common citizen by reducing the gap between government and people, system and facilities, problems and solutions. He gave an example of how Digilocker helped millions of people, especially during the pandemic. School certificates, medical documents, and other important certificates were stored digitally across the nation. He said the services like getting a driving license, birth certificate, paying an electricity bill, paying the water bills, filing an income tax returns, etc have become fast and convenient and, in villages,  e Common Service Centres (CSCs) are helping the people. It is through Digital India, initiatives like One Nation One Ration Card are realized. He commended the Supreme Court for asking all the states to implement the initiative in the respective states.

The Prime Minister expressed satisfaction over how Digital India has changed the lives of the beneficiaries. He noted the benefits of Svanidhi Scheme and solving the problem of lack of security of ownership through Swamitva scheme. He also mentions e-Sanjivini scheme with regard to remote medicine and informed that work is on for an effective platform under National Digital Health Mission

The Prime Minister said the digital solutions that India has prepared in the Corona period are a topic of discussion and attraction all over the world today. One of the world’s largest digital contact tracing app, Aarogya Setu has helped a lot in preventing corona infection. He added that many countries have also shown interest in India’s COWIN app for vaccination. Having such a monitoring tool for the process of vaccination is a proof of our technical proficiency.

The Prime Minister said that the Digital India campaign has helped the country during the Corona period. At a time when developed countries were unable to send aid money to their citizens due to the lockdown, India was sending thousands of crores of rupees directly to the bank accounts of the people. Digital transactions have brought an unprecedented change in the lives of farmers. Under the PM Kisan Samman Nidhi, Rs 1.35 lakh crore has been deposited directly into the bank account of more than 10 crore farmer families. Digital India has also realized the spirit of One Nation, One MSP.

The Prime Minister said a lot of emphasis is being made on the scale and speed at which the infrastructure for Digital India is being made. He added that through 2.5 lakh Common Service Centres Internet had reached remote areas. Under Bharat Net scheme, work is underway on a mission mode to bring broadband internet to the villages. Through PM WANI, access points are being created so that rural youth can connect with high-speed internet for better services and education. Affordable tablets and digital devices are being offered to students across the nation. Production Linked Subsidies are being offered to electronic companies to realise this goal. In the last 6-7 years due to Digital India, around Rs. 17 lakh crore has been transferred in the bank accounts of beneficiaries under various schemes.

The Prime Minister said this decade is going to greatly enhance India’s capabilities in digital technology, India’s share in the global digital economy. 5G technology will bring significant changes in the world, and India is preparing for that. He believed that the youth will continue to take you to new heights due to Digital Empowerment. These will help in making this decade as ‘India’s Techade’.

During interaction with the Prime Minister, Ms. Suhani Sahu a student from Balrampur, Uttar Pradesh shared her experiences with DIKSHA App and how it was useful for her education during lockdown. Shri Prahlad Borghad from Hingoli, Maharashtra shared how he got a better price and saved cost on transportation through e-NAM App. Shri Shubbam Kumar from a village near Nepal border in East Champaran, Bihar shared his experience with the Prime Minister about how he was able to help his grandmother consult the doctor through the e-Sanjeevani app without the need to go all the way to Lucknow. Dr. Bhupender Singh from Lucknow who provided the consultation through the e-Sanjeevani app to the family shared his experiences how it is easy to provide consultation through the app.  The Prime Minister also wished him on the occasion of Doctors Day and promised him that the e-sanjeevani App would be improved further with better facilities.

Ms. Anupama Dubey from Varanasi, Uttar Pradesh shared her experiences on selling traditional silk sarees through Mahila e-Haat and she also explained how she uses latest technology like digital pad and stylus to make new designs for silk sarees. Shri Hari Ram, a migrant now living in Dehradun, Uttarakhand was excited in sharing his experience of getting rations easily through One Nation One Ration. Shri Mehar Dutt Sharma from Dharampur, Himachal Pradesh shared his experiences how e-stores in Common Service Centres helped him in buying products from his remote village without traveling to nearby towns. Smt Najmeen Shah a street vendor from Ujjain, Madhya Pradesh said how PM Svanidi Yojana helped her to economically come back after the pandemic. Smt Wandamaphi Syiemlieh, a KPO employee from Meghalaya, said that she is very grateful for the India BPO Scheme as she was able to work in a very secure environment during the COVID-19 pandemic.

2021-07-01
Editor in chief
Previous: An interactive virtual museum to showcase the tales of valour of the country’s Gallantry award winners
Next: Vaccination has to be a collective responsibility of us all: Vice President