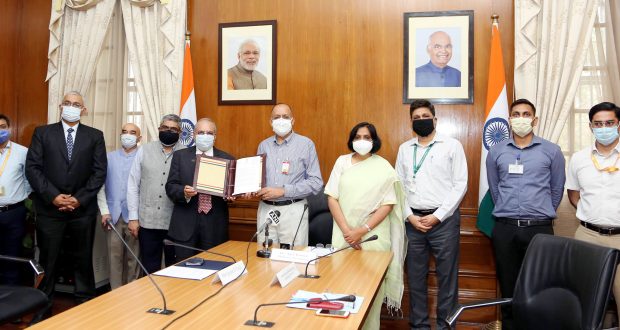 in National June 30, 2021 Comments Off on An interactive virtual museum to showcase the tales of valour of the country’s Gallantry award winners 298 Views

Newdelhi:30/6/21:As the nation celebrates the 75th anniversary of its Independence, Ministry of Defence (MoD) has initiated a project to create an interactive virtual museum of the country’s Gallantry award winners to honour the heroic deeds of the bravehearts of India. MoD will implement the project, with no financial implications, in partnership with Society of Indian Defence Manufacturers (SIDM) and Confederation of Indian Industries (CII). The Approval Letter to this effect was handed over by Defence Secretary Dr Ajay Kumar to President, SIDM Shri Jayant D Patil in New Delhi on June 30, 2021. The project is expected to be completed soon.

The virtual museum will be hosted by the Gallantry awards portal (https://www.gallantryawards.gov.in/). It will provide a 3D walk-through experience through a Gallery Building, Wall of Fame, an Awardee Gallery with their photos &profiles, a tour of War Memorials and an auditorium ‘The War Room’ hosting the tales of bravery. The museum will include a range of animation videos that would bring to life the gallant stories of war heroes. In addition, there will be facility for the visitors to pay their respects by posting a tribute message.

Speaking on the occasion, the Defence Secretary said the initiative will contribute in bringing to life the heroic deeds of the winners of the gallantry awards and acknowledge their immense contribution & indomitable spirit in securing the nation from internal and external threats. He said, it would enable a grateful nation to pay homage to the country’s bravehearts, adding that it would be a befitting tribute to their acts of valour in the service of the nation.

The Defence Secretary said that the project would be the first-of-its-kind cyber museum that would honour the war heroes, emphasising that it would add value to the Gallantry Awards Portal to inspire the countrymen, especially the youth, to serve the nation. The project also aims to express gratitude to the families of the Armed Forces personnel and convey the Nation’s respect to them. Dr Ajay Kumar thanked the SIDM for volunteering to implement the project.

Accepting the responsibility, Shri Jayant D Patil thanked the Defence Secretary for choosing SIDM for this prestigious and unique project that would honour the Armed Forces. He stated that “it is coinciding with the 75th anniversary of India’s Independence and 50th anniversary of the 1971 war and is the best way to honour the Armed Forces”. He added that SIDM would work towards speedy implementation of the project thereafter also will continue to improve the platform on a regular basis. Senior officials of MoD,

2021-06-30
Editor in chief
Previous: Written Result of NDA and Naval Academy Examination (I)-2021
Next: Digital India has realized the spirit of One Nation – One MSP: PM