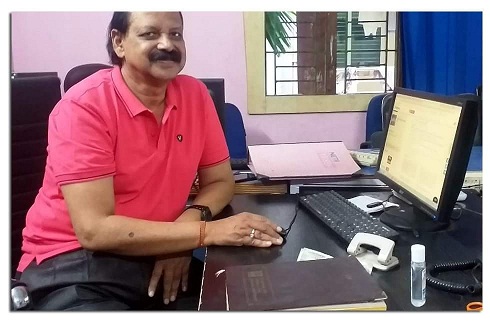 Bhubaneswar:27/6/21: Senior journalist Jimuta Bahana Mangaraj died in a road accident at Janla in Khurda district on Sunday evening, casting a pall of gloom over the media fraternity here. He was 63 and his survived by his daughter Rituparna and son Amrut.  His wife, Jyotsna Routray, who was also a journalist and writer, predeceased him.

Mangaraj was riding a scooty and proceeding towards Bhubaneswar when he met with a tragic accident near Janla under Tamando police limits. The accident took place when the scooty collided with a truck which ran over him. According to reports, Mangaraj succumbed to his injuries on the spot. Local police have registered a case and sent the body of the deceased for an autopsy to Capital Hospital.

Starting his career in the early 1980s, Mangaraj worked with Odia news organisations including Sambad and Prajatantra, and was known for his newsgathering skills. He subsequently launched his own media organisation and used to publish an Odia periodical Neta. Mangaraj also wrote several books including Biju Biju Biju (on legendary Odisha CM Biju Patnaik).

2021-06-27
Editor in chief
Previous: Odisha government today effected major reshuffle in IAS cadre
Next: No nation can move forward by forgetting its culture, heritage and the contribution of great leaders: VP