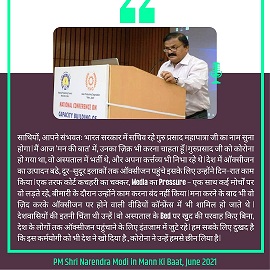 In the ‘Mann Ki Baat’ programme today, Modi defined Mohapatra as a ‘Karmayogi’. The PM said that Mohapatra dedicated his life for the people of the nation till his last breath.

“Guruprasad ji was diagnosed with Corona, he was admitted in the hospital and yet at the same time was performing his official duties too. He toiled day and night to increase the Oxygen producing capacities of the country and to ensure that Oxygen reached far flung areas,” the PM said.

“On the one hand, the affairs of the court, the pressure of the media, he kept fighting on many fronts simultaneously and did not stop working during his illness. Even after being told not to, he used to insist on joining the video conferences on oxygen.”

Such was his concern for his countrymen. He kept on making arrangements to deliver oxygen to the people of the country, regardless of himself being on the hospital bed.

“It is sad for all of us that the country has also lost this KarmaYogi. Corona has snatched him away from us. There are countless people who have never been discussed. Our tribute to every such person would be that we follow the covid protocol fully, get our vaccinations done,” Modi added.

Mohapatra was the Secretary of Department of Industry and Internal Trade (DPIIT)&  son of eminent odia writer Mohapatra Nilamani Sahu  Guruprasad  died due to Covid complications on June 19. A Gujarat cadre 1986-batch IAS officer, he was appointed to the DPIIT in August 2019. He was admitted to AIIMS in Delhi in mid-April after testing positive for Covid-19.