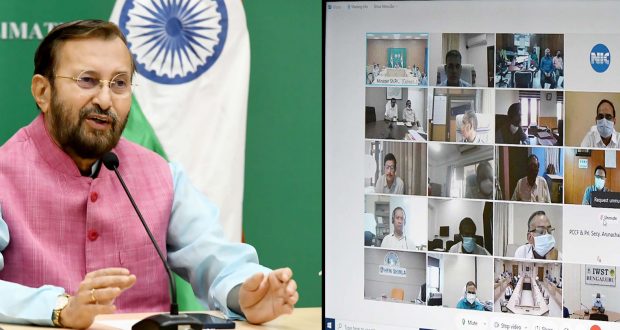 The Union Minister for Environment, Forest & Climate Change, Information & Broadcasting and Heavy Industries and Public Enterprise, Shri Prakash Javadekar virtually addressing at the launch of the Detailed Project Reports (DPRs) on LIDAR Survey of water and fodder augmentation in forest areas of 10 states, in New Delhi on June 25, 2021.

in National June 25, 2021 Comments Off on Detailed Project reports of LIDAR survey of forest areas in 10 states for water and fodder augmentation released 284 Views

Shri Javadekar informed that the project which was awarded to WAPCOS, a PSU under the aegis of Ministry of Jal Shakti, Government of India is a first of its kind and a unique experiment using LiDAR technology which will help augment water and fodder in jungles areas thereby reducing human-animal conflict, help in groundwater recharge, help local communities and also asked state forest departments to use CAMPA funds towards implementation of these projects in right earnest and in accordance with the ‘Ridge to Valley’ approach of watershed management.

WAPCOS with the participation of State Forest Departments identified one major ridge inside a forest block in these states with an average area of 10,000 ha selected in each State for preparation of Detailed Project Reports for planning and identifying locations and structures for construction of appropriate and feasible micro soil and water conservation structures consistent with site-specific geography, topography and soil characteristics.

States/UTs identified one major ridge inside a forest block with the criteria that area selected should have an average rainfall of the state, and the area requires assisted natural generation which means the density of forests should be less than 0.4 or below but should have reasonable potential to regenerate with the ANR interventions.

The project was awarded to WAPCOS in July 2020 at a cost of Rs.18.38 Crore/- for implementation in 26 states over 261897 hectares. The DPR’s for the remaining 16 states will also be released shortly.