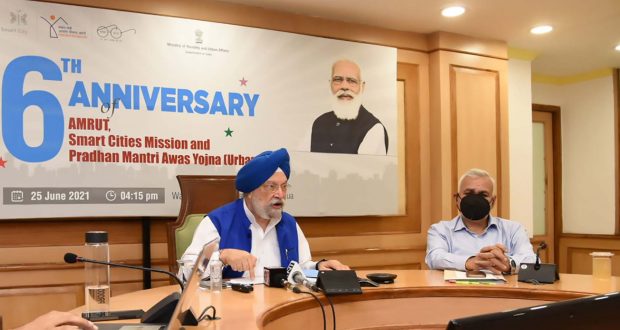 Newdelhi:25/6/21:The Ministry of Housing and Urban Affairs (MoHUA) organised an online event on here today to commemorate 6 years of the three transformative Urban Missions vis. Smart Cities Mission (SCM), Atal Mission for Urban Rejuvenation and Urban Transformation (AMRUT) and Pradhan Mantri Awas Yojana-Urban (PMAY-U), which were launched by Prime Minister Shri Narendra Modi, on 25th June, 2015. The Anniversary event highlighted some of the important initiatives being implemented under Smart Cities Mission. The event was presided by Shri Hardeep S. Puri, Minister of State (Independent Charge), Housing and Urban Affairs and was attended by key urban stakeholders from Central and State Governments including Principal Secretaries of States/UTs, Municipal Commissioners of Cities, and MDs/CEOs of Smart Cities. The date also marked the 45 years of establishment of National Institute of Urban Affairs, an autonomous body of MoHUA, tasked to bridge the gap between research and practice on issues related to urbanization

Odisha’s capital city won two awards in the India Smart City Awards Contest (IASC) organised by the Union Ministry of Housing & Urban Affairs. While Bhubaneswar ranked 2nd among all smart cities of the country in the Social Aspects category for its globally acclaimed project ‘Socially Smart Bhubaneswar’, it secured the 3rd spot in the Governance category for ‘Bhubaneswar Me’ mobile phone application.

Expressing his happiness over the achievement, Bhubaneswar Municipal Corporation (BMC) Commissioner Sanjay Kumar Singh said, “We have achieved these awards with our innovations and ideas and in future, the city will come up with more such citizen-centric projects. The Smart City Project works will be expedited and I hope in future we will win more such awards during Smart City Challenge.”

Union Minister of State (I/C), MoHUA, Shri Hardeep Singh Puri released a short movie that encapsulated the Mission’s journey of six glorious years in fulfilling the dream of a pucca house for millions of Indians. In line with the vision of Prime Minister- ‘Housing for All’ by 2022, PMAY-U has registered outstanding success.  So far, about 1.12 crore houses have been sanctioned for its beneficiaries, out of which more than 83 lakh houses are grounded and more than 50 lakh completed.

Atal Mission for Rejuvenation & Urban Transformation (AMRUT) is the first focused national water Mission and was launched on 25th June, 2015 in 500 cities covering 60% of the urban population. All cities having population above 1 lakh are covered under Mission. Providing piped water supply and sewerage & septage management in Mission cities is the major focus of the Mission. Storm water drainage, non-motorized urban transport and green spaces & parks are minor components of Mission. Overall Mission allocation is ₹1 lakh crore including central share of ₹50,000 crore. State action plans amounting to ₹77,640 crore for basic infrastructure projects were approved, against which projects worth ₹79,772 crore have been grounded. So far, work worth ₹52,477 crores (66%) has been carried out.

Annexure – I: List of winning Smart Cities under ISAC 2020

Annexure II: List of winners under the State/UT Award category

2021-06-25
Editor in chief
Previous: Detailed Project reports of LIDAR survey of forest areas in 10 states for water and fodder augmentation released
Next: India’s term as Chairperson of Governing Body of International Labour Organisation comes to an end