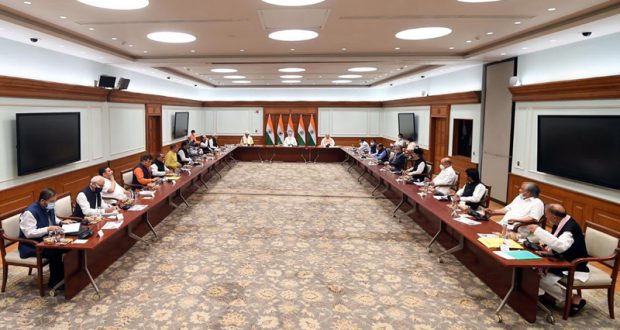 in National June 24, 2021 Comments Off on Prime Minister Narendra Modi today chaired an all-party meeting with the political leaders from Jammu & Kashmir 180 Views

Newdelhi:24/6/21:Prime Minister Narendra Modi today chaired an all-party meeting with the political leaders from Jammu & Kashmir in the National Capital. The meeting was attended by leaders from various political parties including National Conference leaders Dr. Farooq Abdullah and Omar Abdullah, Congress leader Ghulam Nabi Azad, PDP leader Mehbooba Mufti, Home Minister Amit Shah, Jammu, and Kashmir Lieutenant Governor Manoj Sinha, BJP Jammu and Kashmir President Ravinder Raina, and People’s Conference President Sajjad Lone.
Prime Minister Narendra Modi said delimitation has to happen at a quick pace so that polls can happen and J&K gets an elected government that gives strength to J&K’s development trajectory. In a series of tweets, Mr. Modi said today’s meeting with political leaders from Jammu and Kashmir is an important step in the ongoing efforts towards a developed and progressive J&K, where all-around growth is furthered. 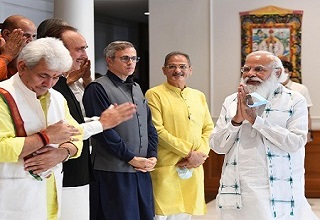 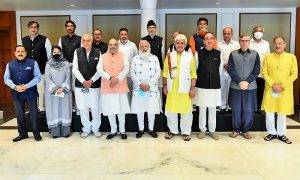 He added that the priority is to strengthen grassroots democracy in J&K. He said India democracy’s biggest strength is the ability to sit across a table and exchange views. The Prime Minister told the leaders of J&K that it is the people, especially the youth who have to provide political leadership to J&K, and ensure their aspirations are duly fulfilled.

Prime Minister Narendra Modi today said, the delimitation process will have to be completed quickly to conduct assembly elections in Jammu and Kashmir. Briefing the media after the all-party meeting this evening, Union Minister Dr. Jitendra Singh said, talks were held in a very conducive atmosphere. He said, Prime Minister listened to every suggestion and praised everyone for keeping their points openly. Mr. Modi said in the meeting that everyone has to work together to strengthen democracy at grassroots level.

Dr Singh said, this is a positive effort towards giving development and strengthening democracy in J&K. He said everyone showed their loyalty towards Indian democracy and the Constitution. Talking to reporters after the meeting, Jammu and Kashmir BJP President Ravindra Raina said, the Prime Minister has assured all the leaders that the government is committed to the development and better future of Jammu and Kashmir.

Former Chief Minister and National Conference Chief Farooq Abdullah also demanded the restoration of full statehood of Jammu and Kashmir.
Muzaffar Hussain Baig of PDP informed that the Prime Minister said the exercise of delimitation has to finish first, and after that the issue of statehood and other issues can be taken up. People’s Conference leader Sajjad Lone said the meeting was held in a very cordial manner.

This was the first such meeting after 5th August 2019 when the Centre decided to abrogate Article 370 of the Constitution that gave Jammu and Kashmir a special status.

Meanwhile, yesterday, the Election Commission held virtual discussions with its representatives in Jammu and Kashmir and deputy commissioners regarding the delimitation of the 90 Assembly constituencies in the Union Territory.

2021-06-24
Editor in chief
Previous: Snana Mandapap of Shrimandir
Next: OPEC estimates India to be the fastest-growing economy in 2021